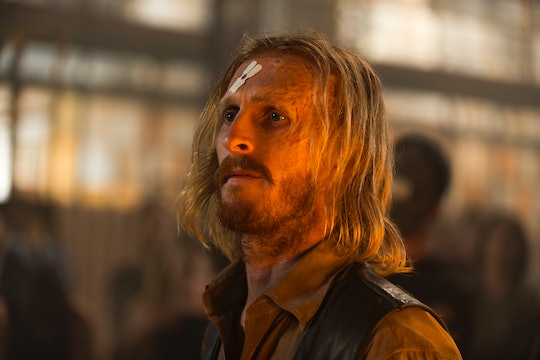 Dwight May Cause Negan's Downfall On 'TWD'

In "Hostiles and Calamities," The Walking Dead will return to the Sanctuary after a few blissfully Negan-free weeks. While all of the other communities in the surrounding area have been scrambling to find a way to deal with the ongoing threat presented by the Saviors, things haven't necessarily been going well over at the Sanctuary. Tensions are building everywhere and they could explode at any moment — and it could be the people Negan relies on most who end up betraying him. For example, will Dwight kill Negan on The Walking Dead?

Dwight definitely has more than enough reason to rebel against his leader. Negan abuses his control over everyone in his purview, but Dwight has suffered in particular. Not only did Negan's actions inadvertently lead to the death of Dwight's sister-in-law (putting so much pressure on her to marry him that she felt she had to flee was what started Tina off on her bad decision road trip, so I feel fine laying the blame at his feet), he also coerced Dwight's wife into being with him instead and burned Dwight's face with a hot iron. No one would blame Dwight for taking out his frustrations on Negan with some serious vengeance. But that doesn't necessarily mean he's going to do anything.

The simple fact is that Negan isn't going anywhere. No one is going to kill him. He's still alive in the comics and Jeffrey Dean Morgan signed on for Season 8, which means there's plenty more Negan to come in the future. But just because Dwight won't be the one to deliver the killing blow doesn't mean that he won't do some serious damage to Negan's iron rule. In the comics, Dwight is integral in taking Negan down because he becomes a double agent, acting as a man on the inside for Rick, Ezekiel, and Jesus.

However, Dwight isn't quite there yet on the show. He's still trying to make his life within the Sanctuary work, even though his problems just keep piling up. In the promo for "Hostiles and Calamities," Dwight is heard parroting the company line ("I'm Negan.") but he may not be Team Savior forever. Being held responsible for Daryl's escape will only bring more heat down on Dwight and increase the animosity between him and Negan, which could bring Dwight closer to defecting.

Dwight could prove to be a very useful ally down the line, but he might have to be pushed to the breaking point before he'll take action.