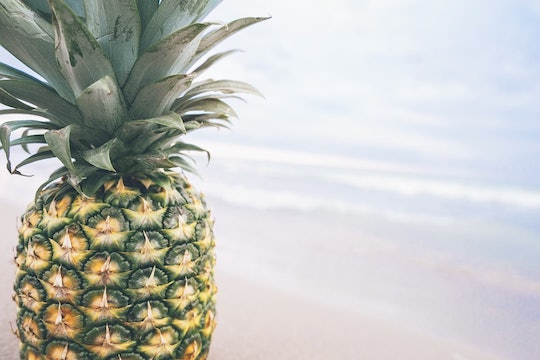 For generations, women have been swearing by the power of certain foods to move along the labor process. Unfortunately, some of these induction encouraging bites don't sound all that appetizing. Enduring super spicy meals or swallowing castor oil sound more like a form of mild torture than a way to try and make your baby arrive. So what's out there for those ladies who can't stomach even the idea of nuclear chicken wings at the end of pregnancy? Maybe some tropical fruit will do the trick. But will eating a whole pineapple induce labor?

Even if you're not a huge fan of pineapple, it seems like the mildest food-related approach to inducing labor. Surprisingly, it may also have the most credit to it's claim. According to the website for Today's Parent, "it’s believed that when pregnant women eat pineapple, the bromelain softens the connective tissue of the cervix, bringing on labour." With bromelain being the magic ingredient, you have to wonder just how much of it you would have to ingest for you started to see any signs of labor beginning. Because you can only eat so much pineapple before your taste buds rebel.

According to a study published in Complimentary Therapies In Clinical Practices, the amount of breomelain in pineapple is low, which means a pregnancy woman would have to eat large quantities before the enzyme would begin to soften the cervix, as The Health Site reported. To make matters even worse, eating that amount of fruit is more likely to cause diarrhea than labor.

Even if you were up for downing a sizable amount of pineapple, you would have to be very strict about they way you eat it as well. According to Mom Junction, only fresh pineapple has bromelain and you have to eat it fast, since the protein breaks down after being cut open. Taking this theory into her own hands, fellow Romper writer, Gemma Hartley, ate ten pineapples over the course of the last two weeks of her pregnancy and saw no results (except for chapped lips).

You may want that secret trick for induction when you're at the end of your pregnancy and can't' take it anymore. But do yourself a favor and spare your lips from chapping. Eating a whole pineapple may be delicious, but it's not going to start your contractions.