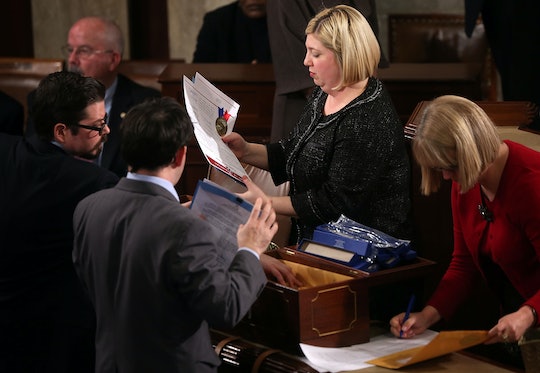 Will Electors Vote Against Trump? A Report Claims That Some Are Staging A Revolt

On Nov. 8, citizens of the United States cast their votes in the 2016 presidential election and it was determined that Donald Trump was the presumed winner — although, in reality, that wasn't exactly the case. On Dec. 19, the Electoral College will gather to finally cast its ballots and decide, in an official capacity, who the 45th president of the United States will be. In a shocking report this week, however, Politico claimed that at least a handful of those charged with making everything official have begun to push back, with the rumor being that some electors might actually vote against Trump. The report also claimed that those same electors might be giving their votes to another person — and therefore staging a "revolt" against an already turbulent incoming presidency.

Trump needs 270 electoral votes to win the election, according to The Hill. And even though it is probably that Trump will win those votes, it also might not be as easy of a vote as some might believe. According to Politico, "At least a half-dozen Democratic electors" have signed on to protest the electoral college and could potentially influence Republican electors. They call these electors who risk going against their state's popular vote and their party's candidate "faithless" electors. And although it may seem like a small number, according to Politico, six faithless electors would be the largest amount of electors to not vote for their party's candidate.

More than likely, this revolt from Democrats would neither help nor hurt Trump, but would instead "contribute to a sense of disarray," according to Politico — because that's exactly what we need in this election (sarcasm). According to The Hill, these faithless voters are also attempting to influence their Republican counterparts to vote for someone "other than Trump" as well. Unfortunately, while most of the Republican Party might not necessarily agree with Trump, not many have said they would vote against him either.

But there is no way to truly know whether electors will vote against Trump come Dec. 19, because there is "no organized effort by candidates or parties" to track the support of their candidates — because everyone assumes the electors will automatically vote for their party's candidate or whomever won the popular vote in each respective state. According to The Atlantic, it seems very unlikely that a few faithless electors could have a major influence on the outcome of the election, or that someone other than Trump could become president.

The practical and political problems would be too difficult to overcome. There would be major legal challenges — which would consume a great deal of time — as well as major questions about the candidate's legitimacy as president.

So while some electors might vote against Trump, it probably won't have any effect on who becomes president. What it would signify is that times are changing. According to NPR, some politicians have come out against the Electoral College calling it "outdated." There have even been petitions with millions of signatures asking electors to vote for Hillary Clinton. (According to NPR, abolishing the electoral college is not realistic and hard to accomplish.)

While a revolt staged by faithless electors could cause temporary panic, it is unclear whether or not it will actually make a difference. Unfortunately, it appears that unhappy citizens and electors are more than likely stuck with Trump for the next four years.