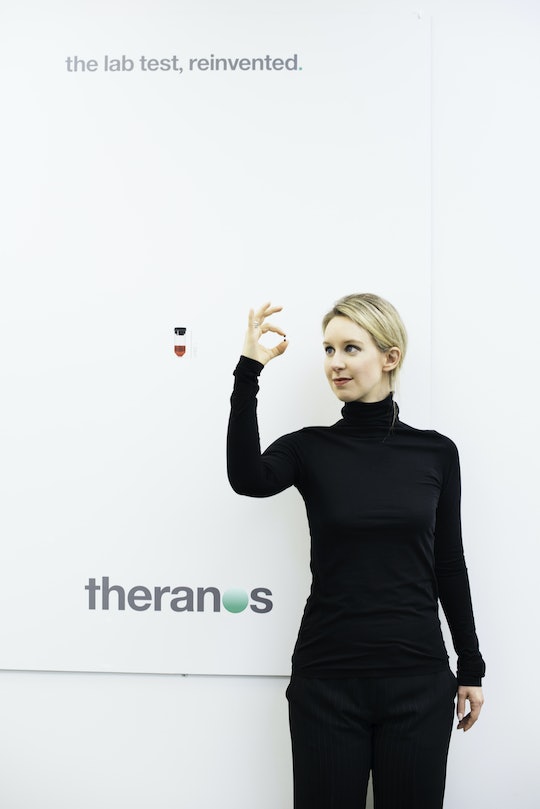 'The Inventor' Reveals Why Elizabeth Holmes Is Facing Jail Time

In 2018, Elizabeth Holmes — the founder and CEO of Theranos, a company that had seemingly created a revolutionary blood-testing device — was indicted on several counts of fraud. According to The New York Times, she has since pled not guilty. But will Elizabeth Holmes go to prison?

Representatives for Elizabeth Holmes did not immediately respond to Romper's request for comment. And right now, it's near impossible to know whether or not Holmes will end up in prison. NBC News reported that Holmes, as well as Theranos' former COO and president Ramesh "Sunny" Balwani, were charged with two counts of conspiracy to commit wire fraud and nine counts of wire fraud.

Per The Guardian, both Holmes and Balwani were released on $500k bail and ordered to surrender their passports. Now, as reported by Esquire, they're both still awaiting trial, though the date of that trial hasn't been announced yet. Until that day comes, Holmes and Balwani's fate is unknown. They might not serve any time at all, depending on what the judge and jury decide. But if they do end up behind bars, they could be there for some time. These fraud charges could result in 20 years in prison for Holmes and Balwani, according to ABC News.

The crux of the issue is that Holmes and Balwani have allegedly defrauded both investors and patients. Theranos had developed a device called the Edison that could supposedly run multiple tests on a single drop of blood, as stated by Refinery29. But as NBC News explained, the results were not reliably accurate — and the indictment claims that Holmes and Balwani knew that. They are accused of not correctly representing the Edison's capabilities. FBI special agent John Bennett told The Guardian:

This indictment alleges a corporate conspiracy to defraud financial investors. This conspiracy misled doctors and patients about the reliability of medical tests that endangered health and lives.

ABC News provided one example of that: a breast cancer survivor named Sheri Ackert had a test done at a Theranos lab on a recommendation from her doctor. The results showed an extremely high level of an estrogen hormone called estradiol. Ackert should have had very little estradiol because she was postmenopausal, so that result could have meant she had another tumor somewhere in her body. But when Ackert received a test elsewhere to double check, it showed her estradiol was "basically nonexistent," as she told Nightline.

Former Theranos research engineer Tyler Schultz alleged that Holmes was aware of the fact that the Edison wasn't all it was cracked up to be. In excerpts from his deposition made available by ABC News, Shultz claimed that Theranos didn't even use the Edison device for the majority of their tests; instead they used third party machines. "While I was working there we only ran seven tests on the Theranos devices," Shultz said in his deposition. He accused Holmes of knowing that the machine couldn't run the "hundreds of tests" she allegedly claimed it could.

But as long as Holmes maintains that she isn't guilty of fraud, then prison time is only a possibility until she and Balwani go to trial. The viewing public can come to their own conclusions when they watch Holmes' story play out from beginning to end in the HBO documentary The Inventor: Out for Blood in Silicon Valley, which premieres on Mar. 18.