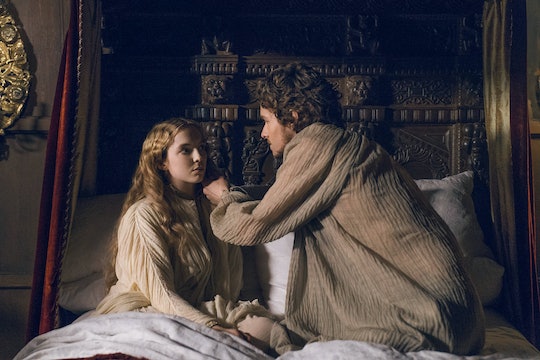 The Gender Of Lizzie's Baby Is Important On 'The White Princess'

Just like everyone couldn't get over the births of William and Kate's Prince George and Princess Charlotte, people in Tudor England were obsessed with royal babies. Well, if not everyone, then the king's family at least — they were the ones concerned with keeping the throne. This can certainly be seen on The White Princess; considering Henry VII and Elizabeth of York were of rival houses, it was especially important. Last week, Elizabeth told Henry she was pregnant. Seeing as back then, the baby's gender mattered, viewers may now be wondering: will Elizabeth's baby be a boy or girl on The White Princess? Everyone's hoping for a male heir.

Different players want Elizabeth's baby to be the next heir to the throne for different reasons. Henry's mother, Margaret Beaufort, wants to keep the Tudors on top — and seeing as Henry's married to a York, this is left uncertain. An heir would assure that his lineage remains the head of English royalty. The baby is also important for Margaret Pole, Countess of Salisbury, whom Elizabeth calls Maggie. Maggie is Elizabeth's cousin and the sister of Teddy (aka Edward Plantagenet) — part of House York. Why does she care so much about Henry having an heir? During Sunday's episode, Teddy's life was put in danger because Henry sees him as a threat to the throne.

Henry knows the people love Teddy, and are afraid they'd rather have him be king. He then locked him away in the Tower of London (spoiler alert: he remained a prisoner of the king the rest of his life and was eventually beheaded). Maggie feels that if Henry has an heir, he would no longer fear Teddy. "I pray he’s a boy," Maggie said in the episode, "Maybe when you’ve given Henry a son and heir he won’t fear Teddy anymore." As history shows, this did not occur, but it was not because Elizabeth did not have a son.

Elizabeth and Henry's first child was Arthur Tudor, Prince of Wales. He was born just 13 months after Henry took the throne. When negotiating a treaty with Spain, Henry agreed to have Arthur marry the daughter of famed monarchs, Ferdinand and Isabella: Catherine of Aragon. Unfortunately, though, Arthur died shortly after the marriage when he was just 15 years old. If you know your Tudor history, the name Catherine is familiar — because she ended up marrying Henry's son and Arthur's brother, Henry VIII. From there, the story only gets more complicated. If The White Princess teaches viewers anything, it's that strange unions like these were the norm in Tudor England.