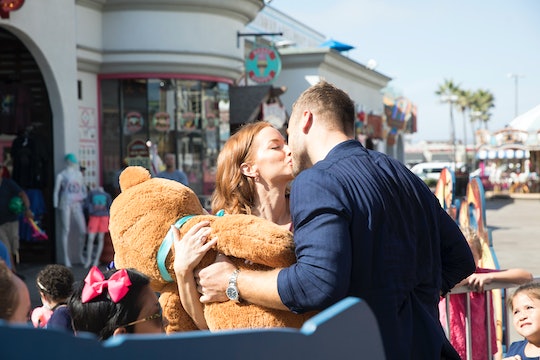 Elyse & Colton Might Be Dealing With Some Drama On 'The Bachelor'

Though every season of The Bachelor or The Bachelorette starts with a whole crowd of contestants, that number dwindles as the weeks go by. But while eliminated contestants from Season 23 may have lost their shot with Colton, they have another opportunity to find love: Bachelor in Paradise. But who from Colton's season might find themselves on a romantic beach vacation? Will Elyse be on Bachelor in Paradise?

That's a tough one to predict right now. Elyse is the 31-year-old makeup artist from Alaska who relocated to Arizona before joining the show. At the moment, she's still in the running to win over Colton, so her future in the Bachelor franchise is still something of a question mark. Her bond with Colton was strong enough to keep her in the competition this long. If they continue to get closer, then they might end up falling for each other. There's still a chance that Elyse could be the woman Colton pops the question to in the final episode.

But if that doesn't happen and Elyse does get sent home, then it's very possible that she could show up on Bachelor in Paradise. If the audience seems eager to see Elyse again after a hypothetical elimination, the execs at ABC could extend an invitation to her. It would be up to Elyse to say yes or no.

Elyse hasn't commented on the likelihood of her ending up on Bachelor in Paradise, but that's to be expected. She has to finish her journey on one show before she can announce her intentions about another one. There hasn't been much news about Season 6 of BiP in general because its premiere date is still pretty far off. Fans have Season 15 of The Bachelorette to look forward to first, as BiP generally airs late in the summer. It's only February, so there will be many more contestants to meet and love stories to explore before BiP even starts filming its next season. It certainly seems too early for casting.

But Elyse has already made an impression on Colton (and the viewers), which makes her a good possibility for Paradise. And it looks like their romance is about to hit a rough patch. A sneak peek exclusive to Entertainment Tonight shows Elyse complaining about the lack of attention she's received from Colton before storming out to confront him. The other women find the situation strange, with Demi noting that the behavior was out of character. "I don't know what's going on with Elyse right now," she said. "I don't know where her head's at."

What lies ahead for Elyse depends on the outcome of her chat with Colton. It could be a minor discussion that they resolve with ease, allowing them to continue dating for weeks to come. But it could also prove more troublesome. If Elyse's dissatisfaction leads to her being sent home, then my money is definitely on her trying again on BiP. A well-liked contestant with a dramatic exit? She'd be the perfect cast member.