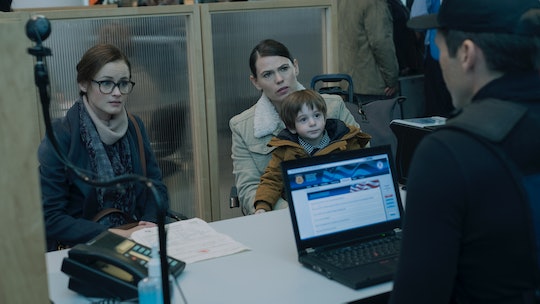 Emily Is Getting Out Of Gilead On 'The Handmaid's Tale"

Hulu’s popular drama series, The Handmaid’s Tale, is back for Season 3 and fans are hoping to see the women of Gilead take a stand and fight back against their oppressors. In the Season 2 finale, Emily (Alexis Bledel) escapes with the help of Commander Lawrence (Bradley Whitford). She’s probably going to get out of Gilead, but fans who are rooting for her to reunite with her family are wondering: will Emily find her wife and son on The Handmaid's Tale?

In Season 1, Emily revealed that before the dark forces of Gilead took over, she was a college biology professor who had a wife, Sylvia, and a young son, Oliver. Because she was a lesbian, Emily was considered a traitor to her gender, which could have landed her up imprisoned or dead. But because she had carried her son to term, Gilmead forced her to become a handmaid. Sylvia, who was a Canadian citizen, was able to flee to Canada with their son, and Emily hasn’t seen or heard from them since.

So far, Emily’s time in Gilead has been rougher than what most other handmaids face, but that mostly has to do with the fact that she can’t tolerate the injustice she sees and takes a stand for what is right whenever she can. In Season 1, when Emily is caught having a relationship with a Martha, she is punished with a forced clitoridectomy meant to prevent any kind of sexual pleasure. Then, after telling June that she is part of a resistance group called Mayday, she tries to escape by stealing a car and running over a Gilmead guard, but she gets caught soon after.

This act of rebellion lands Emily in the Colonies, a radioactive zone that houses prisoners and forces them to work and live in the most horrific conditions. While there, Emily tends to her fellow prisoners’ injuries and continues to push back against Gilead’s oppressive rules. Eventually, she taken away from the Colonies and sent to Commander Lawrence’s home as his new handmaid.

Once there, his wife reveals that he was the one responsible for the Colonies, which puts Emily on high alert. However, when it comes time for the ceremony, Commander Lawrence doesn’t rape her, but he tells Aunt Lydia that he went through with it. When Aunt Lydia lecture Emily on speaking back, Emily stabs her, and then is dragged to her room.

Later that evening, Commander Lawrence takes Emily out in his car, and rather than getting her punished for her attack on Aunt Lydia, he takes her to a spot where she sees June with her baby, Holly aka Nicole. Emily gets on a truck that is waiting to take her out of Gilead, and June hands her the baby as stays behind.

In a trailer for Season 3, you can see that Emily makes it across the border to Canada with Nicole, but you don’t see more than that. Hopefully, as the season progresses, fans will get to see her finally reunite with her wife and son.

Season 3 of The Handmaid’s Tale premieres on Wednesday, Jun. 5 on Hulu.