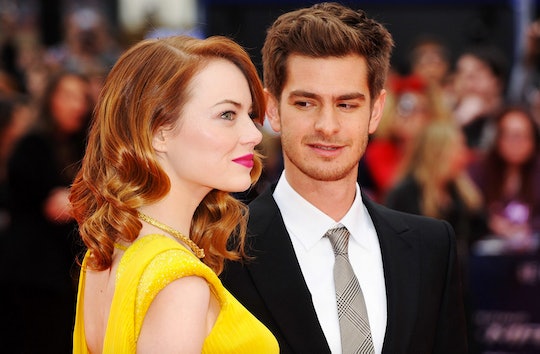 Emma & Andrew Fans Are Praying For A Reunion

2011-2015 documents the love story of Emma Stone and Andrew Garfield, but will 2017 bring forth a new chapter? When it comes to these two, there are signs that a their fairytale is not yet over. The lovebirds may have parted ways in October after four years together, but still remain good friends. Recently, Garfield has been nominated for a Golden Globe for Hacksaw Ridge, and Stone for her magical performance in La La Land. Since both received nominations, and are cool with one another, will Emma Stone and Andrew Garfield be attending the Golden Globes together?

The Amazing Spiderman stars will walk the red carpet, but it's unlikely that they will be doing so hand in hand. The former lovers are friendly with one another, yet according to an Entertainment Tonight source, that's about it. In late August, Emma Stone and the Hacksaw Ridge actor took a stroll together in London. Unfortunately for fans, it was no walk down memory lane. "They are not dating," the ET source assured. "She happened to be in London, so they met up." Damn, well at least these cuties are still talking! The last time I checked, talking is a practical catalyst to making babies.

Talking is also a good sign that they're still might be sparks between the two. To add fuel to the fire, in an interview with the Hollywood Reporter in December, Garfield revealed that he would choose Emma Stone if ever stranded on a desert island. "I love Emma. She's all right. She can come," was his knee jerk reaction. Not many exes can say that they would choose their former significant other to make a life of coconuts with, so that's some serious stuff.

Similarly, in an interview with W Magazine from just before the Globes, Garfield excitedly described celebrating one of his birthdays as "heaven," a birthday spent with Stone. During the sit-down, the 33-year-old star revisited a memory of the couple and his friends getting high and going to Disney Land. From the sound of it, Stone often weighs heavily on the British-American actor's mind. Perhaps one day Garfield will make his way back into her heart.