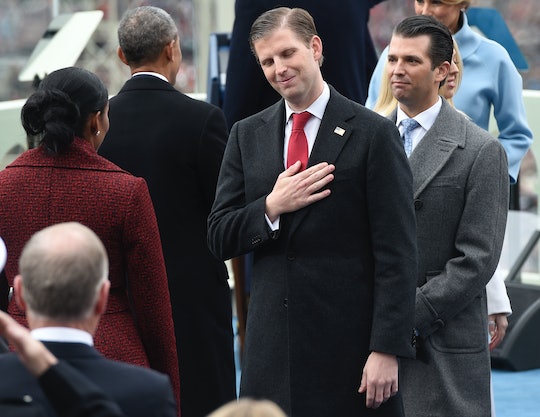 Will Eric Trump Advise His Dad?

Although President Trump has admitted in the past that raising young children wasn't really his thing, there's no doubt that he enjoys a close relationship with his kids as adults. Trump's eldest children, Donald Jr., Ivanka, and Eric, were all fixtures in their father's presidential campaign, and have continued to be front and center during his transition into the White House. But that won't necessarily continue now that he's been sworn in. Will Eric Trump advise his dad? Eric — Trump's youngest son from his first marriage — has instead said he will be stepping up to run his father's company alongside his older brother, Donald Jr. The White House press office didn't immediately respond to Romper's request for comment regarding Eric's role.

While Trump's decision to forego placing the ownership of his company in a blind trust has drawn criticism from ethics experts, Eric told CBS News' Gayle King that he had full confidence in his dad's ability to allow him and his brother to run the Trump Organization without his input. In an Jan. 11 press conference, Trump's lawyer, Sherri Dillon, said that while Trump would be passing ownership of his empire to his children (not exactly reassuring those concerned about the ethical challenges involved in Trump trying to run the country while being a global businessman), he had committed to keeping his family life and work life separate, and that the only way Trump would learn anything about the Trump Organization would be “if he reads it in the paper or sees it on TV.”

The degree to which that will actually happen is still to be seen, and it's something that many people are feeling pretty skeptical about. But Eric, for one, said he isn't concerned at all, and told King that his father has bigger priorities now than running his business:

But of course, if Trump won't be discussing the running of his company with his sons to avoid a conflict of interest, it also means that his sons shouldn't be discussing the presidency with their father — and that they shouldn't be involved in advising him in any way. For Eric and Donald Jr., that will mean focusing on their business and keeping their noses out of politics, but for Trump eldest daughter, Ivanka, it'll actually mean the opposite.

After announcing that she and her husband, Jared Kushner, would be moving to Washington following the inauguration, many speculated that they were positioning themselves to be involved in her father's administration in some way. And while Ivanka's role hasn't yet been defined, she has announced she will be removing herself from the Trump Organization, along with her related director positions in other companies, including her fashion label, according to ABC News, so that she can transition to a new role assisting her father in the Oval Office in some capacity. As for Kushner, he will also be leaving behind his current role in his family's real estate business to serve as a senior White House adviser, according to The New York Times.

One thing Ivanka said she won't be doing in the White House though? Taking over first lady duties for Trump's wife, Melania. Though rumors had been swirling that Ivanka would be setting up an office in in the East Wing — traditionally FLOTUS domain — and that Melania herself wasn't too eager to assume first lady responsibilities, Ivanka told ABC's Deborah Roberts that the rumors were "an inappropriate observation," and said that Melania would in fact assume the role:

There’s one first lady, and Melania will be an unbelievable first lady. I’m incredibly proud of her. She’s intelligent, warm, caring. She’s a remarkable person.

As for Eric, he is already learning that there will likely be a sharp learning curve now that his decisions will be judged under a harsher spotlight. In December, Eric announced that he'd no longer be directly involved in fundraising for the St. Jude Children's Research Hospital in Tennessee — something he'd done for more than a decade — now that his father would be leading the country, since donors could use the opportunity as a way to gain access to the President. Though Trump tweeted that Eric's decision was "a ridiculous shame," Eric told The New York Times that while he thought it was "unfortunate," he also "[understood] the quagmire" surrounding the potential for trouble, and made the call accordingly.

Trump's eldest children have come under a lot of scrutiny as a result of their father's campaign, but given that he is now the president, it seems reasonable that their actions be vetted — especially given the potential for ethical concerns. So far, it doesn't particularly seem like many people outside of the Trump camp and their supporters are feeling confident that the Trump family will be able to successfully navigate their business and political interests completely separately, but it's clear that the Trump children feel entirely up for the challenge. And for the sake of the country, hopefully they will deliver.