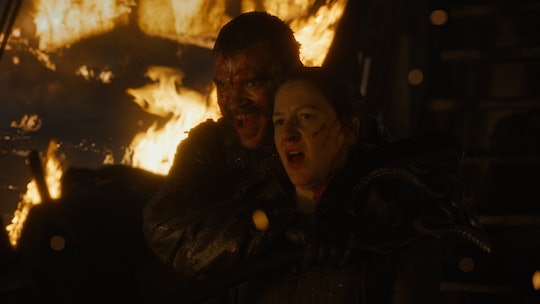 Yara Is In Grave Danger On 'Game Of Thrones'

The second episode of Game of Thrones Season 7, "Stormborn," culminated in a bloody battle on the high seas, befitting the seafaring family at the heart of the conflict. While sailing with the Sand Snakes, Yara and Theon were suddenly attacked by their uncle Euron Greyjoy and all of his kraken-branded merchandise. Euron's forces quickly overwhelmed them and it wasn't long before he was winning the fray. Though Yara put up a valiant fight, she was ultimately captured by Euron. But will Euron kill Yara on Game of Thrones?

It doesn't look good for Yara, though her death might not be quite as imminent as it seemed at the end of Episode 2. If Euron just wanted her dead, he could have simply killed her in front of Theon during the battle like he'd threatened to do. Instead he took her prisoner alonside Ellaria Sand and her daughter Tyene, which made his motives a little clearer. It seems like he's going to use Yara to achieve his goals with Cersei instead of immediately killing her.

Euron had promised Cersei a gift at the end of "Dragonstone" that would prove his trustworthiness so that she might be more inclined to make an alliance with him. It seems obvious that the gift will be Yara, Ellaria, and Tyene – three threats to Cersei's crown that she can now take out.

It may be too much to hope for that all three women will make it out of their captivity alive. The Dornish characters have never been particularly popular with the fandom, and it stands to reason that Ellaria and Tyene will be dispatched as easily as Obara and Nymeria were. The same fate likely awaits Yara, though there's no way to know just who will be the one to take her life – if, indeed, she does die after being handed off to Cersei. At this point, it's still conjecture.

Cersei doesn't show mercy when it comes to taking care of her enemies. If the women are delivered to her, then it seems certain they'll meet their deaths at some point or another. However, Cersei's issues with the Sand Snakes are more personal than any qualm she has with Yara, so it's possible she could allow Euron to decide what happens to his niece. He may be the one to kill her after all.

No matter how it shakes out, there's only one guarantee: the three women captured by Euron are bound to meet a grim end. But who knows? In a surprise bait and switch, Yara might just get away.