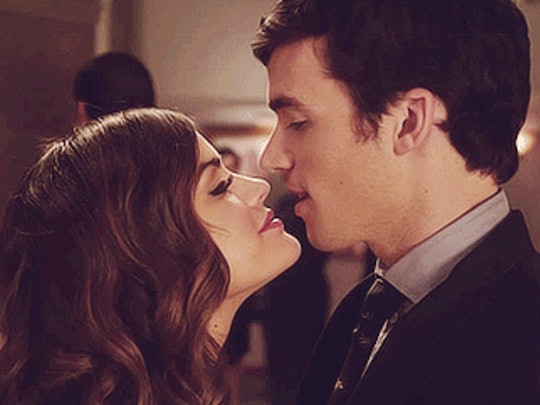 Will Ezra & Aria Get Married In 'Pretty Little Liars' 7A? Someone's Wedding Will Happen

In the last episode of Pretty Little Liars, it was finally revealed which one of the Liars got proposed to. After years of hiding their relationship, dating other people, break-ups, and make-ups, Ezra finally got down on one knee and popped the question to Aria. Ezria shippers everywhere rejoiced and honestly weren't all that surprised. None of the other Liars have a stable enough relationship to be engaged to be honest. Then again Ezra and Aria aren't the picture of a perfect couple either, which begs the question will Ezra and Aria get married before the end of Pretty Little Liars Season 7A?

The odds of Ezra and Aria being married before the mid-season finale seem slim. There's a lot of things working against these two right now. For one, Aria feels like she can't say yes to Ezra unless she's sure she's not going to jail for the murder of Dr. Elliot Rollins, now known by his real name, Archer Dunhill. However, Aria may not be able to get this comfort anytime soon since based on the preview for the next episode it looks like Archer's body might be missing, which would open up a whole other can of worms for Aria and the Liars.

Speaking of people who might not be as dead as we thought, Ezra's ex-girlfriend, Nicole, might still be alive. Although she's been missing for a while and Ezra has finally decided to move on with his life, someone called Ezra from Nicole's phone. When Aria answered all she heard was background noise, and at the advice of Emily, Aria deleted the call from Ezra's phone and decided not to tell him about it. This is very problematic considering Ezra wants he and Aria to be honest with each other but more than that, if Nicole really is alive and Aria didn't tell Ezra she called, Ezra may never forgive Aria.

As per usual, Aria's keeping a lot of secrets from her maybe fiancé and if any of these secrets come out before they make it down the aisle there surely won't be a wedding, at least not in 7A. Hopefully for Aria's sake she realizes honesty is always the best policy sooner rather than later.