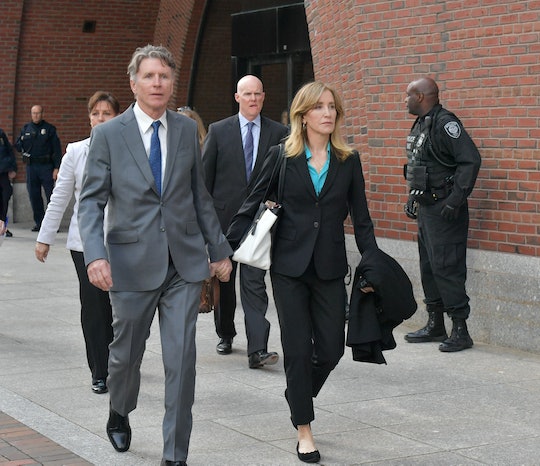 After the college admissions scandal — known to the FBI as "Operation Varsity Blues" — went public, a number of high profile public figures were accused of, for example, spending exorbitant amounts of money and interfering with standardized testing scores to ensure their children were accepted to elite colleges. Since then, several parents have agreed to plead guilty in the scandal, including actress Felicity Huffman. With that said, many are likely wondering if Felicity Huffman will go to jail and how things will play out for the Desperate Housewives star moving forward.

Depending on how Huffman's lawyers work out her settlement, it's possible that Huffman could go to jail, as TODAY reported. The maximum amount of time that she could spend behind bars is about 10 months, considering what she has pleaded guilty to, according to NBC News. However, this is highly dependent on what she and her lawyers work out in court, and there are other variables as well, such as shortened sentencing on account of positive behavior, as USA Today explained.

All of this to say: yes, it is possible that Huffman could go to jail for some period of time, though how long is up for speculation.

Prior to the report that she had pled guilty, Huffman issued a statement to the public saying that she completely takes responsibility for her actions. According to Vanity Fair, she said in a statement:

I am in full acceptance of my guilt, and with deep regret and shame over what I have done, I accept full responsibility for my actions and will accept the consequences that stem from those actions.

My daughter knew absolutely nothing about my actions, and in my misguided and profoundly wrong way, I have betrayed her. This transgression toward her and the public I will carry for the rest of my life. My desire to help my daughter is no excuse to break the law or engage in dishonesty.

Romper's previous request for comment from Huffman's rep was not returned.

The admission of guilt comes less than a week after Huffman appeared alongside other high-profile parents accused of being involved in the scandal in court, including Lori Loughlin, as People reported. Huffman was present in the U.S. District Court in Boston with the other individuals accused for preliminary hearings, which People reported included conspiracy to commit mail fraud and honest services mail fraud.

ABC News reported that 14 of the individuals accused in the scandal all plan to plead guilty, and Huffman is amongst them. The news outlet also reported that, technically, she could face a maximum sentence of 20 years in prison, three years probation, and a $250,000 fine, though it's uncommon that anyone — particularly someone with a high powered team of attorneys — will do that. However, it doesn't make it impossible, either.

With all of this new information coming to light in the weeks since the scandal first broke, more will undoubtedly be revealed regarding the what the next steps are. But as of right now, it's still too soon to tell.