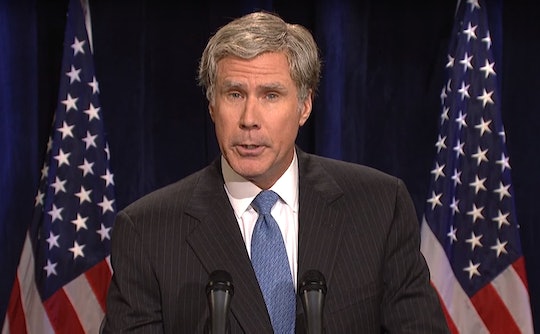 Will Ferrell Returns To 'SNL' As George W. Bush, & He Might Be The Best GOP Candidate So Far

Last night, we received the gift we didn't realize we so desperately needed when Will Ferrell returned to Saturday Night Live as George Bush, reprising his infamous role as the former president to highlight the media circus-turned-all-around dumpster fire that is the field of GOP presidential hopefuls. One by one, Ferrell, armed with Bush-like squinty eyes and nonsensical comparisons, went down the list of Republican frontrunners, pointing out all the (weirdly valid) reasons why he has to decided to enter the Republican Primary because, like he pointed out in SNL's cold open, "the field of Republicans is so messed up, it kinda makes you miss me, doesn't it? And that's saying a lot."

Yes, Will Ferrell-as-George Bush, it does. It really, truly, does.

Saturday Night Live is arguably at its best during an election year. From Amy Poehler as Hillary Clinton to Tina Fey's famous impression of Sarah Palin and her iconic ability to "see Russia from my house," the SNL cast is always on the top of their game when the presidential candidates, well, aren't. And for eight years, Will Ferrell was able to highlight President George Bush with an uncanny impression, making us laugh when we would otherwise want to (and, you know, did) shake our head.

In fact, Ferrell-as-Bush makes so much sense, I realized that I would, without hesitation, vote for him before I voted for any of the Republican nominees. And if it isn't glaringly obvious why, I've made a list of all the reasons Ferrell-Bush 2016 would get my vote.