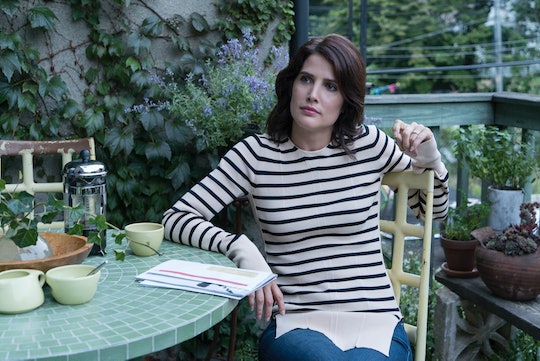 'Friends From College' Has Some Serious Potential For Growth

Netflix is back at it again with an all-new comedy that follows a group of college friends as they reconnect 20 years after graduation. So get ready for some college nostalgia mixed in with lots of drama and comedy in Netflix's new series, which is appropriately titled, Friends From College. The show hit Netflix on Friday, July 14 and since the whole first season airs at once, as is the case for almost all Netflix shows, it wouldn't be surprising if some fans are already wondering: will Friends From College return for Season 2?

As of now, the new series has yet to be renewed, so it's unclear if there will be a second season at all. However, the show definitely has a great starting point. For one, the it is co-created by Nicholas Stoller, who's written and directed notable comedies like Forgetting Sarah Marshall, Neighbors, Get Him to the Greek, The Five-Year Engagement, and many more. Then there's the fact that it also has an all-star cast which includes the likes of Annie Parisse, Keegan-Michael Key, Cobie Smulders, and Fred Savage, and guest stars like Seth Rogen and Kate McKinnon. So really, how can you go wrong? Plus, it's not uncommon for the streaming service to wait a little while before giving it the green light for another season pickup. So I wouldn't get too worried about it just yet.

As I stated earlier, the show will center around a group of friends from Harvard, and though it should be fun in theory, Friends From College will be filled with complications, mostly due to the fact that these characters have such a long and complex history together.

First, there's Ethan (Key) and Lisa (Smulders), whose marriage seems to be falling apart. It doesn't help that Ethan's having an affair with their college buddy Sam (Parisse), who is also married to someone else. (That's definitely going to come up at some point and cause a lot of friction in the group.) They're not the only one with issues in the love department, however.

Max (Savage) brings along his partner for the weekend who clearly does not like Max's friends and Nick (Nat Faxon) only sleeps with woman half his age. Plus, based on the preview, it looks like he and Lisa have a kind of flirtation going on as well. Seriously, this group is really messy, however, that's probably what will make this show so funny. The only one that seems to be without issues is Marianne (Jae Suh Park), but I'm tempted to believe that she's hiding some of her own secrets as well.

It'd be surprising if this show didn't get renewed for a second season. Friends From College has all the necessary ingredients to make an excellent show. Hopefully, that'll be enough to make it successful.