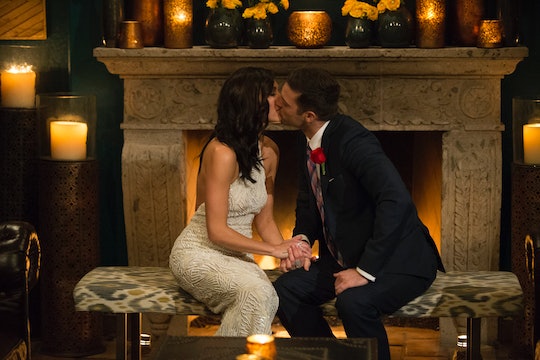 Is Garrett Going To Win 'The Bachelorette'?

Bachelor Nation knows how it goes. As soon as a new season starts, rumors flurry about who the winner is (even though it will be revealed months from now). During the premiere a clear frontrunner stood out: Garrett Yrigoyen. Already, fans are wondering: will Garrett win The Bachelorette? He's already a controversial candidate, which doesn't bode well if that's the case.

According to his ABC biography, Garrett is a 29-year-old medical sales rep from Reno, Nevada. While his career doesn't sound too exciting, his biography also states that he loves outdoor sports. "Raised in a small town in Central California, Garrett is a true outdoorsman who loves fly fishing, hiking and snowshoeing," it says. "When he's not on an outdoor adventure, he's perfecting his Chris Farley impression. He's excited to find love with the Bachelorette…down by the river!"

Garrett didn't hesitate to show off this side to Becca on night one. He showed her how to fly fish, which doesn't sound like my idea of a great date, but Becca was so swooned she gave Garrett the first impression rose. Longtime Bachelorette fans know this rose is a big deal, and the ultimate reason why fans believe Garrett to be the frontrunner.

For those of you who were inspired and just started watching The Bachelorette, the first impression rose has actually foreshadowed the winner of the competition in the past. Take the prior leads who wished Becca well during the premiere. Kaitlyn Bristowe, Bachelorette 11, gave Shawn Booth the first impression rose; not only did he win, but Kaitlyn and Shawn are rumored to have just married.

Unfortunately, though, evidence shows Garrett may not be all that of a catch. HuffPost reported that Garrett "liked" social media posts mocking immigrants and Parkland shooting survivors. While his accounts appear to be deleted, the gross screenshots remain. Becca herself addressed the Garrett controversy on ON With Mario Lopez. "Is it fair to judge someone based on who they follow, what they like," she said. "That’s not being very open-minded if you’re just going to start to discriminate on someone’s thoughts." Becca continued, "I just want everyone to watch it back and to get to know these guys and to get to know me for who we really are and not social media... because that’s just a small glimpse into a person and it’s not always reflective of who they are."

It seems that Becca is staying by Garrett through this, which can also be an indication that he goes far on — and maybe even wins — The Bachelorette. Last year, when Rachel had to deal with a racist contestant, Lee, she didn't hesistate to call him out on Twitter:

"I may not see everything and I may do things on my own time... but I keep my grass cut low so the snakes will show," Rachel tweeted. Then again, this was after Lee was eliminated, and she was pretty quiet beforehand...so perhaps Becca will turn out to do the same thing. For fans like me who avoid spoilers, we're going to have to watch until the end to know if Garrett wins — but so far, be appears to be ahead of the rest.