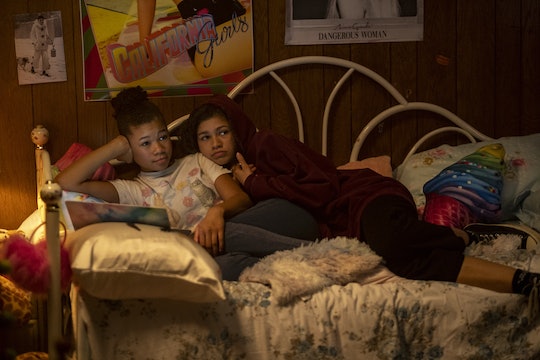 There are just three episodes left this season on Euphoria, but fans are already starting to sense that the ominous tone which hasn't let up since the beginning may be driving toward a character's death. Tons of theories about who dies are already floating around, but one cunning Redditor speculates that it's Gia who dies at the end of Euphoria. In a thread on the show's Subreddit requesting new and intriguing theories for how this season might end, one fan pitches that there might be evidence to support the death of Rue's little sister. Writes Redditor slamonthebrake:

I think Gia could possibly die. I could see there being a big build up all season/maybe even next season where we focus on all of the other characters and the danger that they can get into, Rue’s progress and everything, just to have innocence lost and feel everything unravel.

Gia's death would obviously create enough drama to generate another season's worth of material for the show's protagonist and narrator. And the unexpected twist would make for good TV, considering Rue is just starting to get back on her feet, thanks to the stabilizing effect Jules has on her.

All season long, fans have been speculating that it's Rue who might die at the end of Euphoria. (Technically, the theory speculates that she's been dead this whole time and narrating her story from the beyond.) But while overdoses often occur when addicts relapse after a successful period of sobriety, it just doesn't seem terribly plausible that the series would kill off the lead character, played by an executive producer on the show, no less.

It's possible that Rue could die and continue to narrate the show, appearing in the background of episodes à la Hannah Baker in 13 Reasons Why. A fatal overdose just as she's begun to find her footing would certainly be tragic. But I actually think it would be even more tragic if she finally got herself back on track, only for her beloved little sister to die.

At this point, the audience doesn't really know too much about Gia. She's younger than Rue and so she doesn't run with the same group of friends. For that reason, Gia tends to be left out of the main narrative that's playing out. Viewers do learn that Gia is the one who discovered Rue overdosing and called an ambulance, saving her sister's life. It's also clear that Rue loves Gia very much and the two have a strong bond.

In the carnival episode, Rue loses track of Gia, who's run off to smoke pot with some of her younger friends, which obviously puts Rue in an awkward position. She's forced to resist coming down too hard on her sister for what is ultimately a pretty normal teen experience, while fielding her own anxieties about what she knows can happen. In the end, Rue covers for her with their mom and that's the last viewers really see of Gia.

According to the preview, episode 6 is set to focus on Chris McKay, the high school football star turned college benchwarmer. But Sam Levinson, the show's creator on whom the character of Rue is loosely based, returns to direct episodes 7 and 8. So if anything were to happen to Gia, my guess is that it would be during those two episodes, and that Rue would somehow be responsible. The guilt of killing her sister would be enough to send Rue into a self-destructive tailspin. And the fallout of that mess would be more than enough to hook viewers for another season.