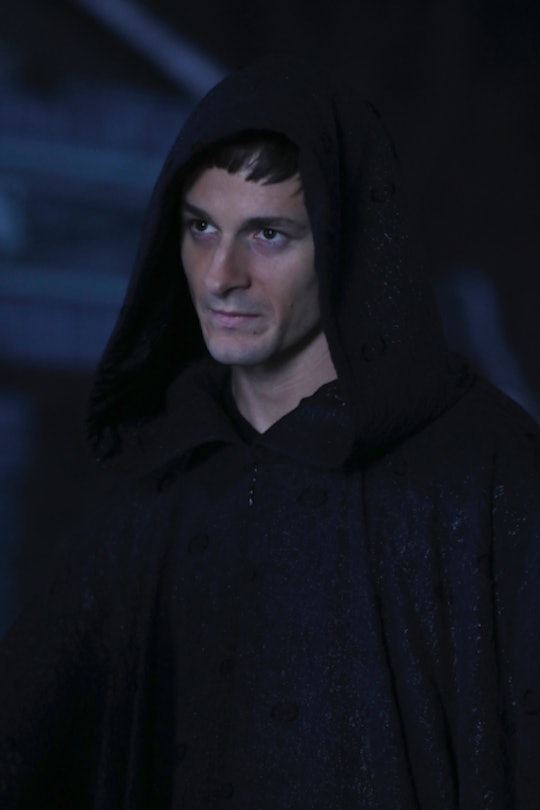 Gideon Has An Evil Plan On 'Once Upon A Time'

It's been a long time since we last checked in with our favorite members of Storybrooke. And while it's now great to see them again, their troubles are still far from over. This is particularly in thanks to Rumple and Belle's now fully-grown son, Gideon, who we now know is the cloaked, hooded figure intent on murdering our beloved Savior in cold blood. But will he succeed? Will Gideon kill Emma on Once Upon a Time? He's currently on a very deadly mission and from what I can tell, he has no plans to stop until it's completed.

However, before we completely write Gideon off as a straight-out villain, it's worth mentioning that his intentions may be more pure than we initially realized. While at first I thought Gideon wanted to bring Emma die for the single purpose of inheriting her Savior powers for his own selfish reasons (much like what his dad would do), this seems to not be the case. At least, not exactly. As he explained to his parents, he wants Emma's powers so that he can save a community that has been under the Black Fairy's rule for too long. He plans to save them and take her down once and for all.

It's unclear right now what this place is and why Gideon is so invested in its fate (perhaps that's where he grew up throughout his childhood?), but either way it's nice that he wants to rescue those people, however, committing murder in order to do so seems very counterproductive. That is not a very Savior-like thing to do, if you ask me.

It's also strange why he doesn't just ask Emma and the rest of Storybrooke for their help in his quest. After all, it's not as though they haven't traveled to far off places before to save the day. Why should now be any different? So either this is just really poor planning on his part or Gideon isn't telling us the whole story.

I want to believe that Gideon's mind can be changed. Rumple certainly tried to convince Belle that it could happen. But as of now, he's intent on bringing Emma down, regardless of what anyone else says. Granted, I highly doubt the show will kill off its main character, so I feel like she'll end up being safe regardless of whether or not Gideon has a change of heart. But then again, you never know on this show. All magic comes with a price and maybe this is one fate that can't be altered. We'll find out soon enough.