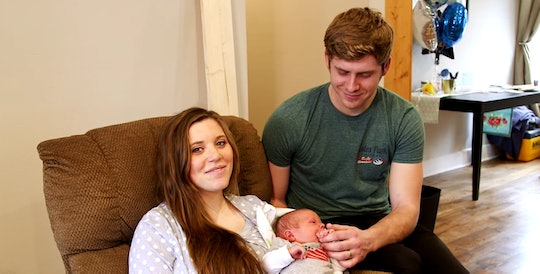 'Counting On' Fans, Joy-Anna Duggar's Birth Episode Is Happening Sooner Than You Think

Joy-Anna Duggar and her husband, Austin Forsyth, know a thing or two about being on TV. Duggar has starred on her family's reality TV shows on TLC, 19 Kids and Counting and Counting On since she was a pre-teen and fans have watched her grow up and now fall in love with her husband. But Duggar has one more thing to celebrate because she recently gave birth to her first child, a named Gideon. Because so many milestones have been captured on TV for the two of them, it's only natural for people to want to know if baby Gideon's birth will be shown on Counting On as well.

If you know anything about the Duggar family, then you know that the answer to that question is yes — Gideon's birth will definitely be on Counting On. This season of Counting On premiered at the end of February and has already proven to be incredibly exciting. Fans have watched Duggar and Forsyth go on their honeymoon, watched as Duggar's sister, Jinger Duggar, moved into her first home with her husband, Jeremy Vuolo, and watched the other older Duggar siblings live their everyday lives. And fans are about to see even more exciting things happening later in the season: they're going to be able to watch Duggar give birth to Gideon on Monday, March 19, according to Inquisitr.

A two-part episode titled "A New Bundle of Joy" and "Joy Gives Birth," according to TV Guide, is planned for Monday where fans will not only get to watch Duggar announce that she is expecting a baby but they will get to see Gideon arrive in the next episode. In the episode "Joy Gives Birth," according to TV Guide, the episode will show as "Joy prepares to welcome her first child as her due date approaches. With Austin by her side, Joy goes into labor and gives birth to her baby." Yep, you get to see Gideon's birth that soon — less than a month after his arrival in late February.

If you have a cable subscription with TLC included in it, there is even better news. You can watch Gideon's birth on TLC's website right now before the birthing special. The two-part videos are only 19 minutes in total but document all of the very exciting and emotional moments leading up to Gideon's birth and what happened afterwards.

The episodes clear up any rumors or questions that fans might have had about Gideon's birth. Spoiler alert: Duggar wanted to give birth at home but ended up giving birth at the hospital via C-section. In the episode, you also find out that Duggar and Forsyth waited until Gideon was born to find out the sex of their baby instead of finding out ahead of time. The episode also provides an inside look in the intimate moments inside the Forsyth home and the delivery room.

While this birth episode is so sweet, especially for fans who had been waiting for this moment, there is a little bit of controversy surrounding it. Some fans who have already seen the episode, according to Inquistr, have accused the Duggars of allegedly reshooting scenes where the other Duggar family members find out that Duggar has gone into labor (but that doesn't take away from the episode).

Although this episode skips over a lot of Duggar's pregnancy, watching her give birth is still super exciting nonetheless. But in part one of the episode, fans do get to learn that being pregnant with Gideon was a little hard on her. "I think it has been somewhat challenging just because there are a lot of new hormones and emotions and I've never had before," she said in the episode.

Since Duggar and Forsyth announced that she was expecting in late August, Counting On fans have been waiting for this moment to see the baby's arrival and now they finally can when the episode premieres this Monday.