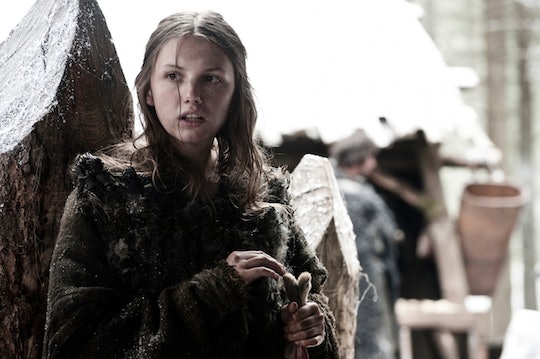 Will Gilly Return To 'Game Of Thrones'? As Long As Samwell Tarly Does

The last time we saw Gilly on Game of Thrones, she was getting the eff out of Castle Black with Samwell Tarly, and not a moment too soon. The sh*t was about the hit the fan with Thorne and his plan to do away with Jon Snow and the jerks of the Night's Watch were only going to get worse with their unwanted advances on Gilly. But now that Season 6 has begun, you might be asking where is Gilly on Game of Thrones? And, for that matter, Sam and Little Sam, too. Because wherever the future maester is, you know his girlfriend (that's pretty official now, right?) and honorary son are, too.

In the Season 6 clip, we finally get a glimpse at what Sam and Gilly have been up to since fleeing Castle Black and The Wall. Because that's what they did, basically. There was no place for the sweet sensitivity of Samwell or Gilly, who needed to not be in the presence of awful men for once. In the clip, Gilly and Sam are in a ship on their way to Oldtown, were Sam plans to become a trained maester. And, true to Samwell Tarly, the scene has a bit of humor in it as he he dealing with some awesome sea sickness.

But, as casting evidence shows, there will be a lot more to Sam and Gilly's story than settling in the Citadel and living happily ever after. Not only was Freddie Stroma, known for his role in the Harry Potter series, cast to play Sam's brother, Dickon Tarly, but Downton Abbey's James Faulkner will be playing the Tarly patriarch. Both Sam's mother and sister have been cast, as well.

Basically, Season 6 of Game of Thrones will give us a lot more insight into Sam's high born upbringing. But also, sadly, it probably won't go over well because you don't get sent to The Wall for life unless you're a criminal, a bastard, or sort of shunned from your family. And the latter makes the most sense.

As the eldest Tarly child, Sam was originally the heir of the family, but when he displayed a less than warrior-esque personality and demeanor, Randyll Tarly became ashamed and disappointed in his son and sent him to The Wall. Now, being away from Castle Black and out on the road, so to speak, we can expect Sam and Gilly to return with a new side story, and to run in with the rest of the Tarly family. Which can only prove to be heartbreaking for the couple, who have had enough unfairness bestowed on them both already. Team Samwell all the way, right?