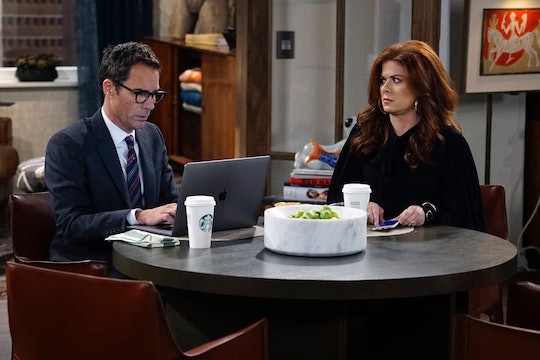 Get Pumped For These 'Will & Grace' Guest Stars

It's the year 2017 and everything old is new again, including all of your favorite sitcoms from the '90s. Specifically, I'm talking about Will and Grace, a groundbreaking show for the perception of LGBT characters. It also featured a lot of A-list guest stars back in the day. So now that it's coming back, who can audiences expect to see? Take a look at some of the Will and Grace guest stars to look forward to during the NBC reboot. Spoiler alert: you should get excited.

The original show centered around four friends (or frenemies depending on the day) played by Eric McCormack as Will Truman, Debra Messing as Grace Adler, Megan Mullally as Grace's wealthy assistant Karen Walker and Sean Hayes as their lovable yet self-centered friend Jack McFarland. All four of the original stars will be back for more witty insults and sharp jokes, which the series was always known for. However, they will also be joined by several other characters who will guest star. Some of these actors will reprise their guest-starring roles from the original series while others will have entirely new parts to play. I can't believe I'm saying this, but I am actually excited for this reboot. Back in the day I always preferred Will and Grace to shows like Friends. Sorry not sorry.

So here's who you have to look forward to in the weeks to come...

The character Lorraine Finster was first introduced as Karen's rival who slept with her husband Stanley. Karen then got revenge by marrying Lorraine's father, who was played by Jon Cleese. Thus Lorraine became Karen's step-daughter. Hijinks and razor-sharp insults ensued, obviously. Unfortunately, there's no word yet on whether Jon Cleese will make it to the show as well.

Harry Connick Jr. played Grace's ex-husband/husband/ex-husband Leo. This rocky relationship, whose drama spanned seasons and oceans, was a huge part of Grace's story, so obviously he needs to make a come back. But after all of the on-again, off-again between them, it's not clear how big of a part Leo will have in Grace's life again. Regardless, it'll be fun to see how he fits into the story moving forward.

But Grace isn't the only one who will have to deal with ex-drama. Will's ex Vince is also confirmed to be returning. They broke up in the season finale, but a flash-forward saw the two of them married with children. The creators have decided to ignore the original show's series finale, so where does that leave Vince in this reboot? Fans will just have to wait and see.

Broadway has a new darling and his name is Ben Platt, star of the Tony-award winning musical Dear Evan Hansen. He has also been confirmed to have a guest-starring role in the new show. It's unclear what character Platt will play in the show's reboot, but I hope it involves singing.

Some of you may know Lynch as the tough-as-nails cheerleading coach on Glee. Will this be the sort of character she brings to Will and Grace? The show has always been a way to showcase the lives of LGBT characters, and Lynch has always been a positive voice for this movement. Also, she's hilarious. I have a feeling she'll be interacting mostly with Karen. I don't know. It's a hunch.

Another talented actor with Broadway credentials, Andrew Rannells is both hilarious and charming everywhere he goes. If you haven't seen him on Broadway in The Book of Mormon, Hairspray, Hamilton, Jersey Boys, or Falsettos, perhaps you'll recognize him as Hannah's friend Elijah on Girls. His character in the show has not been confirmed yet, but I can totally see him having some amazing scenes with Hayes' Jack. Perhaps Rannells will play a younger, more attractive rival for Jack who starts up all sorts of drama. I can't wait.

InTouch Weekly reported that insiders let slip that the former first lady would be joining the cast in a guest role. While I sincerely hope this bit of gossip is true, none of the cast or show creators have confirmed it. So maybe it will happen, but also maybe not.

As the series reboot has already been renewed for a second season, I have no doubt that even more incredible guest stars will pop up in time and I, for one, can't wait to watch it all unfold.