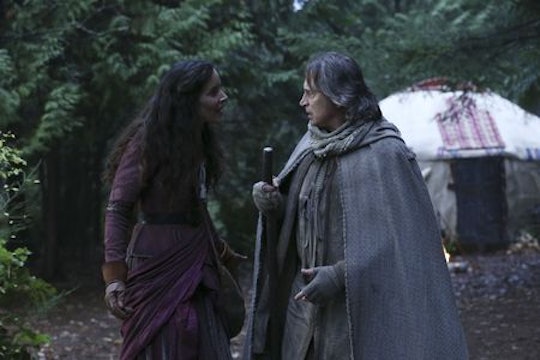 Will Hades Steal Belle's Baby On 'Once Upon A Time'? Rumple Made A Deal With The Devil

Oh, Rumple. Rumplestiltskin’s long road to redemption on Once Upon a Time has not been quite as smooth as Regina’s (long live the queen!) but at least it’s been interesting to watch. No matter how many steps forward he tries to take, Rumple always seems to take at least three more back, constantly reverting to his old, trickster ways. Last week’s episode was no exception, and left viewers wondering, Will Hades steal Belle's baby on Once Upon a Time?

Let's back up a bit. We learned via flashback that as a cowardly human, Rumplestiltskin made a deal with the local sorcerer (the Enchanted Forest’s answer to CVS), promising him his second born child, in exchange for a potion that would cure the deadly snakebite Baelfire got while playing. The potion worked, and we also got to see a little more of Rumplestiltskin’s spirited first wife, Milah, who would later leave him for Hook. In a later flashback, as the Dark One, Rumple revisits the sorcerer to whom he has promised his unborn kid, and kills him, thereby effectively nullifying the contract. Which took a fair bit of forethought, if you think about it.

Unfortunately, according to Hades, that’s not really how contracts work. The sorcerer Rumple killed however many hundreds of years ago is still alive and kicking in the Underworld, and he has transferred the details of the contract to Hades. This is relevant because, dun dun dun, Belle is pregnant!

So now Hades has a pretty solid hold on Rumplestiltskin and, presumably, the rest of the gang.

Callousness is essentially Mr. Gold’s middle name. This trait was reinforced in last week’s episode in his unflinching murder of the sorcerer to whom he owed a pretty serious debt and his betrayal of Milah, who he enlisted in the Underworld to help rescue Hook. However, his very deep and genuine love for his child, Neal/Baelfire, and for Belle has always been the one mitigating factor keeping the heroes from casting him off completely. (That, and some complicated familial relationships, which the Once Upon a Time characters have gotten fairly used to by now. “So you’ve been with my ex and my son?” Milah asks Emma. Uhhh…) Rumplestiltskin only became the Dark One in the first place to get Baelfire back from whatever other world he fell into, and he’s tried seriously to become the good man Belle believes him to be deep (very, very deep) down inside. Though she should have learned by now that you just can’t change a person.

Knowing what we know about Rumple’s personality, about both his willingness to make decisions the rest of the good guys would find morally repugnant, and his extraordinary love for the people closest to him, there’s really no telling what lengths he’ll go to to stop Hades from collecting his and Belle’s child. Presumably, everything short of total world destruction. And maybe even that.

So will Hades steal Belle’s baby? Not if Rumple has anything to say about it. The effects of what he’ll do to try and stop it, however, could be devastating.