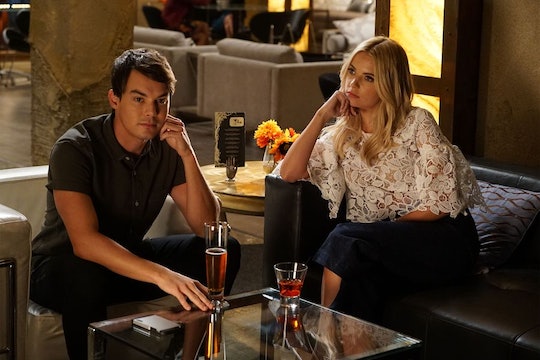 Will Hanna & Caleb Get Back Together On 'Pretty Little Liars' Season 7? Their Plan Could Set Off Something Bigger

A lot changed in the five year time gap between Season 5 and Season 6 of Pretty Little Liars. Charlotte was committed and released from the hospital for the intense amount of stalking she had performed. Aria got a job in Boston. Emily dropped out of college. Spencer became a political-savant. And, unfortunately for many shippers, Hanna and Caleb broke up during the Pretty Little Liars time jump. It was as sad is it could get, considering the two had been through so much. But, on Season 6B of Pretty Little Liars, Hanna and Caleb are reconnecting, so could they actually get back together? UPDATE: In the 6B finale, Hanna and Caleb kissed after Hanna explained that she came back for Caleb during the time jump.

Well, if that is to happen, there are a few huge obstacles in their way. Those two obstacles being Jordan, Hanna's fiancé, and Spencer, Hanna's BFF and Caleb's current girlfriend. Messy, right? Look, if things were going to be easy, it wouldn't be Pretty Little Liars. At the current moment, the two are in relationships. While Jordan seems like a fine guy — seriously, there's nothing wrong with him — Hanna just doesn't seem very into their relationship now that she's returned to Rosewood. Spencer and Caleb seem to be going strong, but there's only so much time Haleb time Spencer is going to be able to handle before possibly letting it affect their relationship.

On the penultimate episode in Season 6, Hanna and Caleb created a plan to get Uber A to expose him/herself. Hanna would confess to the murder of Charlotte and hope that it would bring their text-happy foe out of the woodwork. The idea is absolutely bananas, but Haleb tends to believe that it will work — and they're pretty determined to come together and make it happen.

Obviously, Spencer is not thrilled with the two working together on such a risky plan. Not only could the plan not work, but Hanna might actually turn herself in for a murder she didn't commit, which would be even more disastrous.

The teamwork happening between Hanna and Caleb certainly seems indicative of a future rekindling, but at the time, I'm not so sure it's in the cards. As the unpopular opinion, I think Spaleb is a solid pair. I think they need more time together before Hanna and Caleb come back together — just make sure it happens before Hanna has to walk down the aisle with Jordan. Like I said, nothing wrong with the guy... I just don't like him!