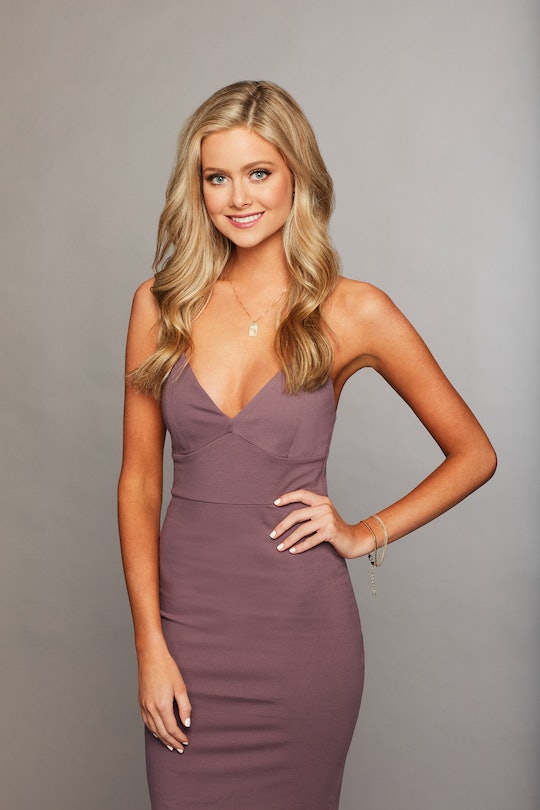 This 'Bachelor' Contestant Could Be 'The Bachelorette' & Fans Are Into It

Season 23 of The Bachelor is almost over. That means the final rose is sitting on a table somewhere for host, Chris Harrison, to walk over and say "Colton, ladies, this is the final rose of the night." Only, this rose comes with an engagement ring and promises of forever love, or something. With that said, talk of the next Bachelorette are more frequent, though the announcement won't happen until the finale of The Bachelor. There are, however, signs Hannah G. will be the next Bachelorette.

If you're a true Bachelor fan, you avoid spoilers like the plague — which is what I do here. That means it's not possible to know if Hannah G. is the next Bachelorette, yet. As one of the final three women remaining (with Tayshia and Cassie), and the overnights in the Fantasy Suites still to come — as well as that dang fence jump heard 'round the world — Hannah G. still has a shot at winning Colton's final rose (and heart). So, it'd be unfair to say she'll be chosen as the next Bachelorette because it would mean she's eliminated from The Bachelor.

I'd hate to be the one to tell you all the things before the things have all aired. It's best to experience all the Bachelor-related things together, as opposed to skipping to the ending online, am I right?

That said, there are some real hints Hannah G. might not have been chosen, and is at least a consideration for the role of Bachelorette, such as this recent Instagram post that reads super vague and insinuating. The caption is that much more telling saying, "**drinks 1st marg**... thank u, NEXTTTT."

To make the case for Hannah G., you have to admit she's had the most even-keeled, quiet narrative on the show. No drama, seems pleasant to be around, and friendly with the other contestants. IRL, she has tons of followers on social media by way of marketing her own brand as model and photographer. And fans have her back — including previous Bachelor contestants like Raven Gates.

If you're still not convinced Hannah G. is in the running, take this info as you will: out of 14 Bachelorettes, all finished in the top four from their appearing season of The Bachelor. "I do not know who the next Bachelorette is," Harrison told ET in January. "We have not even gotten there. We really did put the Bachelorette talk on the back burner, so I promise you, we have not even come close to starting that conversation yet."

To be fair, a lot of fans have commented on Hannah's apparent lack of personality. Kind, sweet, and quiet are great in person — but not for a reality TV dating competition. It requires a certain boldness and confidence I'm not completely sure she can handle. Plus, she hasn't expressed an interest in being into the idea of dating 30 men at once. There's still at least one more episode she'll appear in if she doesn't end up winning. That means you have to practice a bit of patience before it's even a possibility she's eligible to be the next Bachelorette. Because, you know, she can't be engaged to Colton and be Bachelorette at the same time.

This is all speculation, of course, because you have yet to see Hannah G. get officially eliminated by Colton. Before that happens, it's anyone's guess as to who'll nab the title of Bachelorette. If that doesn't soothe the soul, take comfort in knowing that even if she's eliminated and isn't chosen to lead her own trail of single studs, there's an island in Mexico referred to as Paradise that would welcome her with open arms.