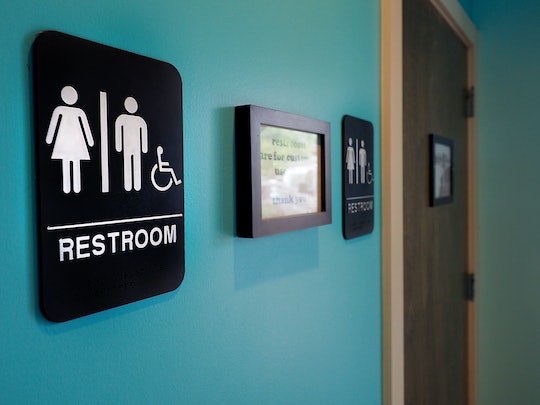 This week, North Carolina's state legislature called a special session to repeal HB2, more commonly known as the notorious transgender bathroom bill. But it's been two whole days that the legislature has been debating the bill now, and some were beginning to wonder if HB2 would be repealed at all. On Monday, the city of Charlotte repealed its anti-discrimination ordinance that allowed transgender individuals to use the bathroom that corresponded to their gender. But Monday's repeal of the anti-discrimination law was contingent on the state repealing HB2 overall. In fact, there was a clause in the resolution that gave the state until Dec. 31 to do so, or the city would reinstate its law.

It was that anti-discrimination law that led to North Carolina passing HB2 in the first place. HB2, in case you've forgotten, mandated that transgender individuals use the bathroom corresponding to the gender on their birth certificate and stated that state laws overrule all local ones.

The repeal of HB2 was supposed to be pretty much in the bag, but now North Carolina lawmakers (Republicans) are saying some pretty ridiculous things about it. On Wednesday, the Republican party issued a statement which read,

Republicans are upset because a full version of the resolution shows that they didn't repeal their entire anti-discriminatory ordinance, but just the parts that related to HB2 and transgender bathroom use. So there are anti-discrimination clauses prohibiting the city from entering into a contract with a business that has discriminated against someone based on their gender.

So Republicans in North Carolina are basically fighting over the fact that a law exists that says businesses can't discriminate against other human beings. And a city had to list an anti-discrimination ordinance to get a discriminatory law passed. Meanwhile, it's the rights of LGBTQ people and people of color and anyone who can be discriminated against that are being used as a bargaining chip.

But instead of getting dramatic about protecting citizens, lawmakers are getting dramatic on the floor of the legislature and talking about a bill "soaked with blood" in random 1 a.m. statements to the press. It's all a little much. The point is that there was a deal between Charlotte and the state's legislature and right now, the state GOP isn't holding up its end of the deal.

By late afternoon Wednesday, lawmakers were talking about passing a bill that would repeal HB2, but would also prevent local governments from passing laws about public bathrooms and other accommodations for six months (so Charlotte wouldn't be able to reinstate its discriminatory ordinance). According to The Chicago Tribune Sen. Jeff Jackson, a Democrat, said of the bill, "This wasn't the deal. This bill breaks this deal. Charlotte would have not repealed its ordinance is this was the deal."

It seems more about a power play at this point than anything else. Many were upset that they were even in a special session at all. "There is no extraordinary circumstance, other than the extraordinary hubris of a city council telling us we have to act by a certain date," Rep. Jeff Collins, a Republican, said.

On Wednesday night, the state's legislature adjourned without repealing anything. Hopefully North Carolina can figure something out before the holidays.