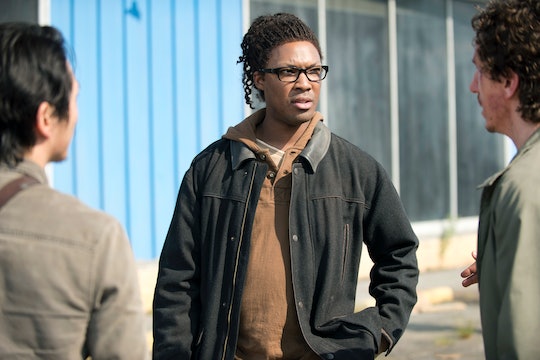 Will 'The Walking Dead' Season 8 Bring Back Heath?

In The Walking Dead universe, pretty much anything is possible, which is part of what makes it so terrifying — and so much fun to watch. One fan favorite has been missing for far too long, though, and it's high time fans find out what happened to him. So will Heath be in Season 8 of The Walking Dead? His fate after going out on a supply run with Tara has yet to be revealed.

Heath, played by Corey Hawkins, showed up in Season 6 as one of the survivors of the outbreak who had made it into the Alexandria Safe Zone, where he quickly settled in and assumed official supply runner duties. He was good friends with Glenn (RIP) and always a team player, until the end when he started to get a little disillusioned with the group, realizing that it's every person for themselves. Before then, he was a serious no-person-left behind type guy.

Heath was last scene in the episode titled "Swear." Him and Tara were out on a supply run when they found themselves trapped on a bridge and surrounded by a ton of walkers. This forced them to separate and while Tara found herself in the midst of a secret community known as Oceanside, Heath's whereabouts remain a mystery to this day. When Tara eventually returned to the bridge, she found Heath's glasses and tire tracks, though it's unclear if he left on his own accord or if he was taken by someone.

This means that he's either dead and gone, or slated to make some other appearance later on when a new community or story line is introduced. It's possible, given Heath's character, that he's still making his way through the wilderness, avoiding walkers, and trying to stay sane. Which, isn't easy to do in these parts.

In real life, Hawkins went on to star in Fox's 24: Legacy series and usually could signify that his Walking Dead character isn't coming back. However, the network ended up canceling the show back in June of this year, so perhaps the writers were able to make it so that Heath will pop up in the coming weeks? Don't bet on it.

During a recent interview with Entertainment Weekly, showrunner Scott Gimble stated that it's not likely fans will see Heath pop up in Season 8. However, that certainly doesn't mean viewers will never see the character again. On the contrary, Gimble very much plans on incorporating Heath's story back into the plot at some point. "We definitely have not seen the last of Heath, period," Gimble teased. "I will say that. I don’t mean to disappoint the Heathies. He will be on the show. He will be within The Walking Dead again."

For his part, Hawkins has also kept Heath's fate open-ended. Last year, he said in an interview at the Television Critic's Association conference that it was always a possibility for him to return to the series:

Scott [Gimple] has been great in terms of asking and talking and really trying to figure out where the character was coming from and going, and you know, professional things take you where they take you, that’s normal. But we left it open … so I will just say there is always a possibility, there is always a way.

So maybe they were just waiting for filming schedules and availability to line up. It certainly seems as though fans can expect to see Heath alive again at some point — just probably not this season.