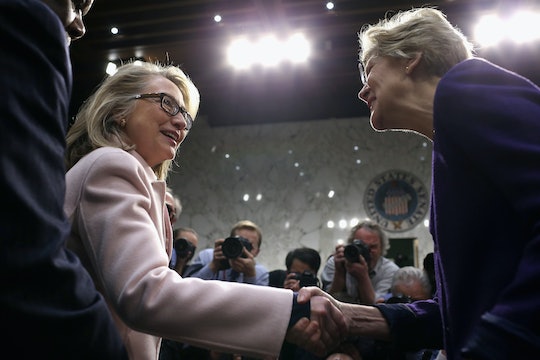 Will Hillary Clinton Choose Elizabeth Warren As Her Running Mate? It'd Be A Good Move

As the chances of a Bernie Sanders presidency dwindle, those feeling the Bern are latching onto a new hope. Many Sanders supporters don't agree with the politics of former Secretary of State Hillary Clinton — but if she chose Massachusetts Sen. Elizabeth Warren as her running mate, it would make the Clinton pill a whole lot easier to swallow, once it came time to vote against a Republican nominee. Will Clinton choose Warren as her running mate, though? It depends on who you ask.

Adding Warren as her vice-president would certainly help Clinton win over Sanders supporters. Compared to Clinton, she's fairly new to politics — but in her time as a senator, she's taken on big banks, been held up as an environmental leader, and called out student loan programs. Those that may not trust Clinton would, most likely, trust Warren.

So far, though, Warren hasn't endorsed a candidate, although according to The Boston Globe, she had pretty good things to say about Sanders just last month:

He’s out there. He fights from the heart. This is who Bernie is. He has put the right issues on the table both for the Democratic Party and for the country in general so I’m still cheering Bernie on.

At the same time, Warren signed a letter with other female Democratic Senators encouraging Clinton to run for the presidency in 2013, and ever since Clinton's campaign chairman, John Podesta, told The Boston Globe that there are women on the list of possible Clinton running mates, some have wondered whether a Clinton-Warren ticket is in the works. After Clinton, Warren is easily one of the most famous Democratic women in politics at the moment; she has a large following; and she's already attacked several Republican nominees (if she runs with Clinton, Trump and Cruz better watch out, because Warren does not mince words).

Others, however, say that a Clinton-Warren ticket would be impossible. Some say Warren wouldn't want to give up her current influence on the Senate for a mere four years of influence in the White House. Others suggest that Warren doesn't have enough experience in politics to take on the role (before her time in the Senate, Warren was a law professor, and she's turned down calls to run for the presidency before). Not to mention that Warren sides more with Sanders' policies when it comes to Wall Street than she does with Clinton's.

Regardless of whether the two women join forces, many think Warren will help bring the Democratic party back together after this long, odd, and rather divisive primary. "There’s a growing belief that Elizabeth Warren will play a large role during the unification moment," Adam Green, co-founder of the Progressive Change Campaign Committee, told The Hill. "Her influence is right in the middle of the race, and it’s because her hands are clean and she hasn’t endorsed one candidate."

With her strong record and her ideology, Warren would make a strong running mate for either Sanders or Clinton — but she would especially help Clinton bring in a few Sanders supporters' votes, which is what she's truly missing at the moment. Whether that ticket will actually happen? We'll just have to wait and see.