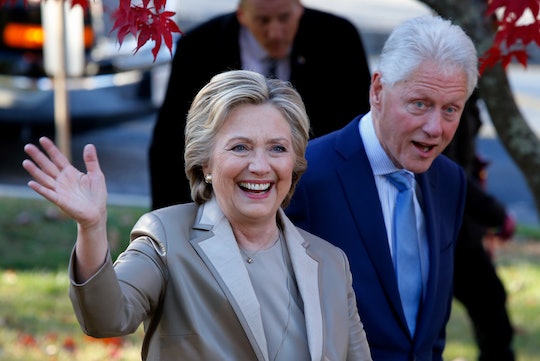 Will Hillary Clinton Concede The Election? She Didn't Speak At The End Of The Night

At two in the morning on the east coast on election night, it became pretty clear that Donald Trump had won the election, though the race had not been officially called. Then the announcement came that Hillary Clinton would not be speaking that night. Will Hillary Clinton concede the election? She surprised some people by not speaking at the end of the evening.

In the wee hours of the morning the day after Election Day, Clinton's campaign chair John Podesta addressed the somewhat heartbroken crowd of Clinton supporters at the Javits Center in New York City. He told the people that they should all be proud of Clinton and that the night wasn't over yet. He then advised them all to go home and go to bed and that they'd see them in the morning. It was then clear that Clinton would not be appearing to make a speech conciliatory or otherwise that night. But will she call Donald Trump to officially concede the race? Whether she does or not, she will tragically not be the next President of the United States, much as she deserves the job. Trump has won, and now he will be making his victory speech. Perhaps it is a better question as to whether or not he will be gracious in accepting his victory.

It is traditional for the losing candidate to call their opponent and officially concede the race. In 2012, Mitt Romney delivered a concession speech to his supporters at around 1am. Clinton obviously did not choose to address her supporters on election night, which rubbed some people speaking on CNN (notably ex-Trump campaign manager Corey Lewandowski) the wrong way. It was argued that as the candidate, she had a responsibility to speak to her supporters and lose gracefully. While others argued that maybe she was simply tired, and there's no way to know what her state of mind was.

While Trump threatened on multiple occasions to fight the results should he lose, Clinton has never made any such claim. It's possible that she will still win the popular vote, and in such a case it's possible she could pull an Al Gore circa 2000 and demand a recount of the votes. However this scenario is fairly unlikely. It is more likely that she will concede the election in the morning, once she and everyone else has gotten some sleep. Perhaps it won't look so gloomy in the morning.