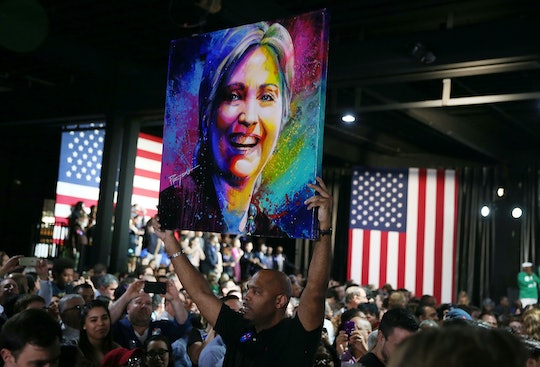 Will Hillary Clinton Run Against Donald Trump? Her Super Tuesday Speech Seems To Believe It

Hitting the stage in Miami, Florida Tuesday, former Secretary of State Hillary Clinton acknowledged that this has been, indeed, a "Super Tuesday" for the presidential candidate. Because though competition Sen. Bernie Sanders nabbed home state state Vermont on the biggest day so far of the 2016 election, Clinton clinched the wins necessary to maintain her momentum. And, based on Clinton's speech on Super Tuesday, it seems the candidate is looking ahead when it comes to her competition. And, no, I'm not referring to Sanders — I'm referring to Donald Trump.

Certainly, it's still too early to say whether Clinton and Trump, who maintained a huge lead during Super Tuesday, will indeed be competition. (After all, Trump did lose Texas and Oklahoma to Sen. Ted Cruz.) But Clinton certainly seemed convinced. While speaking, she referenced the reality TV star several times... without even saying his name. (Yes, she subtweeted Trump. And they say Clinton doesn't understand millennials. Take that!)

In what way? Well, Clinton began her speech by telling supporters that they need not "make America great again" (referencing Trump's famous campaign slogan and fashion statement), but, instead, "America never stopped being great. We have to make America whole."

Of course, Trump couldn't keep himself from responding:

And the Trump references only continued. From there, Clinton referenced Trump's oft-quoted desire to build a wall on the U.S.-Mexican border, telling the cheering crowd:

Instead of building walls, we're going to break down barriers.

Yes, Clinton discussed opportunities, and "imagine what we could build together." The key word? "Together." Especially when stacked up against a candidate who has spent his campaign trying to silo immigrants and Muslims.

At this point, Clinton clearly is focusing on inspiration in her attempt to gain voters, combating a campaign on the GOP side that has been negative since Trump garnered boos during his first debate. But can she continue that rhetoric leading into the general election, especially if facing off against the acid-tongued Trump? (Particularly considering Trump's toxic language towards women in particular?)

If her speech tells us anything, it's that she's already gearing up for that ever-more-likely scenario. We'll have to see if her future remains "Super."