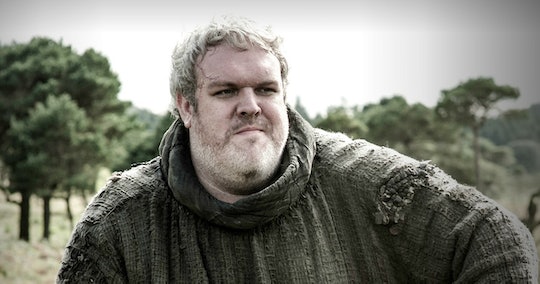 Will Hodor Become A White Walker On 'Game Of Thrones'? The Chances Are Unfortunately High

On the May 22 episode of Game of Thrones, the origin of Hodor's name was finally revealed and it was heartbreaking. While Bran and the three-eyed raven were warging, the White Walkers attacked the cave. Meera begged Bran to wake up so he could warg into Hodor, but Bran didn't wake up. Instead he somehow warged through the Hodor in the past and in the present, connecting the two. It was complicated, but not as complicated as what could be coming. It appears that our dear Hodor died on Sunday's episode, but what are the chances that Hodor becomes a White Walker on Game of Thrones?

After Bran warged into Wyllis in the past, Hodor in the present then got up and helped Meera fight against the White Walkers, holding them off as Meera dragged Bran out of the cave. All three made it out of the cave (without Summer, R.I.P.) but Hodor had to "hold the door" against the White Walkers while Meera made her escape with Bran. Meera kept screaming at Hodor to hold the door and that infiltrated into Bran's warging, effecting the past Hodor, causing him to repeat "hold the door" over and over again until it morphed into "Hodor."

To make matters worse, in the present as Hodor held onto the door, White Walkers pushed threw scratching him and inevitably killing him while Meera and Bran escaped.

Although Hodor's death was incredibly heartbreaking, what would be even worse is to see Hodor come back as a White Walker, or a wight, the corpses that march in the "Army of the Dead." With Hodor left in the clutches of the White Walkers and the Night King, chances are high he'll be turned. Even worse, there's a chance Summer will be turned as well, and as protective as she was when she was with Bran she'll be just as lethal as a wight under the Night King's control.