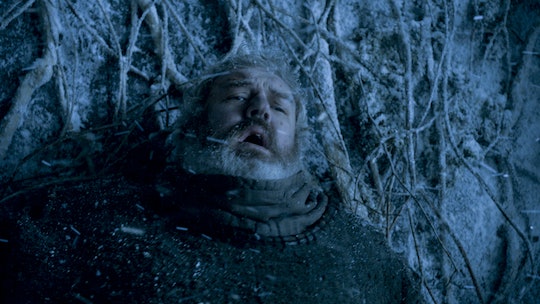 Will Hodor Return To 'Game Of Thrones'? His Exit Was Heartbreaking

The ending of Game of Thrones' "The Door" is one that's sure to linger in the minds of fans for a long time. A Stark protector of few words, Hodor had been absent for Season 5 before reappearing in Season 6, and his return answered some very important questions about the character's past. Learning that Hodor had once been unaffected by his mysterious affliction was heartbreaking on his own, but finding out just what changed him from Wyllis into Hodor was worse. Then almost immediately after that revelation, it looked like he was gone for good, his life forfeited in further service to Bran Stark. But is he really gone? Will Hodor return to Game of Thrones?

Viewers last saw Hodor frantically trying to keep an army of wights from going after Bran and Meera and seemingly succumbing to the overwhelming force. However, his actual body wasn't seen after the fact – not that dying really means anything in a world where Melisandre can bring a guy back to life with a sponge bath and a haircut. There's also the possibility that Hodor will become a wight himself, since White Walkers can reanimate corpses. But since that would be unimaginably awful to watch, let's just wipe the thought from our minds.

Hodor's actor, Kristian Nairn, spoke to Entertainment Weekly after his exit from the show and expressed a similar hope that it's not really the end for Hodor. "The interesting thing is it’s kinda left open," Nairn said. "You don’t actually see him [die]. It’s implied. So who knows? He may come back as a White Walker, maybe he got away." Bran coming face to face with a reanimated Hodor would really just add insult to injury, but it would be wonderful (and sadly not very Game of Thrones) if Hodor had been able to escape dying somehow.

Considering Nairn goes on to say he "couldn’t have asked for a better goodbye to a character I love," the chances of Hodor's survival are pretty dismal. Self-preservation didn't seem to be high on Hodor's list of priorities (whether he had a choice in the matter at all is another question; Bran was controlling his mind, after all) as Bran's protector, and he didn't look like he was going to be stepping away from his post holding the door any time soon. Much like Stannis' death, which was also technically offscreen, it seems the show was uncharacteristically sparing the audience just a little bit of pain. Which is really the least it could do.

It may be comforting to imagine something less bleak had happened to Hodor, but his exit at the end of "The Door" definitely looks like it was permanent.