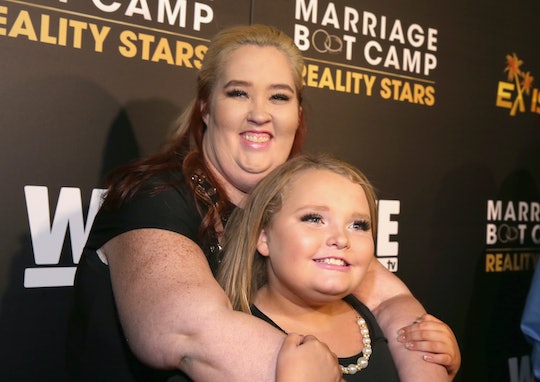 Could Honey Boo Boo Come Back To TV?

Alana Thompson, who we all have come to know as Honey Boo Boo, came into our lives when she was just 6 years old. She stole the thunder on TLC's Toddlers & Tiaras in 2012, so much so that she was given her own reality show, Here Comes Honey Boo Boo shortly thereafter. The show only lasted two seasons, so we haven't heard her catchphrases like "A dolla makes me holla!" since 2014. And, while the Georgia native, now 12, has made appearances on her mother's show, Mama June: From Not to Hot, fans who "redneckognize" Alana's talent (beyond being a pageant queen) are wondering if Honey Boo Boo will be back on TV.

The second season of "Mama June" Shannon's WE tv chronicle of her extreme weight-loss journey will air in January, according to WE tv. But what about her curly-haired daughter? Will we see more of the family's adventures in McIntyre, Georgia? Or, perhaps, Honey Boo Boo is sitting around repeating those wise words she once uttered on air: "I don’t need the drama."

Mama June wrote in a Facebook post at the time: “It isn't true I promise my kids r #1 priority over anything else and I would never put them in danger period over this or anything else they r my life this is my past I left him 10 yrs ago for it and I wouldn't go back," according to the NY Daily News.

McDaniel's son, Michael, also said that his father isn't guilty. "His criminal record was [the result of] false accusation," Michael told E! News. "My father is a good man and a good father, he has always been good, he would never hurt anyone." TMZ reported that McDaniel denied comments back in 2014 by leaving a sign on his door that read, "Private Property. NO Trepass. NO COMMENT."

Regardless of all the allegations, the reality series received predominantly negative reviews from television critics, anyway, according to IMDb. Some Toddlers & Tiaras viewers were displeased by the news that Honey Boo Boo was getting her own show from the start.

"At some point, awful is just awful instead of entertaining —and isn't it about time TLC was held accountable for making the world a worse place?" The Hollywood Reporter wrote in 2012 before the show even aired. "A precocious/annoying child named Alana but better known as Honey Boo Boo Child, who is pageant-whored-out by her obese mother, June — got her own series."

It seems as though the family did win over the hearts of many, however — like Miley Cyrus, La Toya Jackson, Rosie O'Donnell, Miranda Lambert and Anderson Jackson, according to Fox News.

Honey Boo Boo has also made poised media appearances on OWN Network's Oprah: Where Are They Now? But there she explained that she was both happy and sad that her show was canceled.

"We stopped filming the show, I was kinda happy about that and at the same time, I was sad," she said on the segment. "So I was... sa-happy?"

It's unclear whether TLC will bring back Honey Boo Boo after all the controversy, despite giving Mama June another crack at reality TV. And we're not sure Honey Boo Boo herself is too bummed over it anyway. But we are sure that there's plenty of material to work with if they decided to move ahead with a new concept.

For one, Alana's her 17-year-old sister, Lauryn "Pumpkin" Shannon, welcomed a baby girl with her fiancé of two years, according to E!