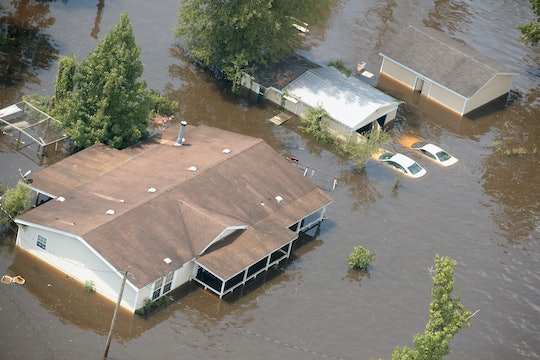 There's no question that Hurricane Harvey has been absolutely devastating, with heavy rains and flooding that have left the city of Houston, Texas and the surrounding areas underwater. But as the country is focused on the recovery effort, a new storm has actually been gaining momentum in the Atlantic, and according to CNN, it could be set to hit the United States next week. Will Hurricane Irma be as bad as Hurricane Harvey? It's not entirely clear at this point exactly what will happen, and on Thursday, the U.S. National Hurricane Center said it doesn't yet pose an immediate threat to land, according to CBS News. But the storm has been rapidly intensifying — it is now a Category 3; experts are keeping a close watch on Irma to try to better predict what its effects could be.

On Wednesday morning, Irma was classified as a tropical storm, but by Thursday the storm was upgraded first to a hurricane, and later to a "major hurricane," thanks to its sustained high-speed winds, according to Reuters. The good news so far, at least, is that Irma might not actually turn out to be a huge deal — according to CBS News, historically, only 10 to 15 percent of hurricanes located where Irma is have actually struck the United States. But the bad news is that, at the moment, all hurricane-prone areas of the country are considered at risk, and given that some computer models are predicting that Irma could actually hit the Gulf of Mexico, it's possible that cities hit by Hurricane Harvey might be in for even more destruction than they've already faced.

As a Category 3 storm, Hurricane Irma is now the second major hurricane to occur this year, and while it's currently not as strong as Hurricane Harvey was when it hit land (it was a Category 4 hurricane when it hit Corpus Christi, according to CNN), Irma is predicted to reach Category 4 status as it continues to zero-in on the Caribbean, according to Forbes. Beyond that though, the storm's trajectory is still up for debate: according to The Independent, American models are expecting the storm to head towards the Carolinas by next weekend, while European models see Irma moving towards Cuba and South Florida.

Meteorologists will likely know much more about what to expect from Irma after the long weekend, but for now, one thing that definitely seems certain is that the National Hurricane Center's forecast for this year's Atlantic hurricane season has been pretty accurate. In May, the agency predicted an "above-average" level of activity, according to Reuters, and at the beginning of August, the NHC said the season could be "extremely active." So far, according to The Independent, there have been nine named storms and four hurricanes this year, although Hurricane Harvey has definitely been the worst: at least 44 people in Texas are thought to have died in connection to the storm, and more than 30,000 people have been forced to move into shelters due to flooding.

For now, Hurricane Irma is far from being an emergency, and shouldn't be a reason to panic. But given the impact of Hurricane Harvey, it's also no surprise at all that people are feeling on edge about it. With about another week to go though before Irma could pose an imminent threat to the United States, there's still time for experts to learn a lot more about what Americans should be able to expect. And though Irma doesn't seem to be playing around, there seems to be a good chance it won't come close to matching the strength of Hurricane Harvey, if and when it hits land.