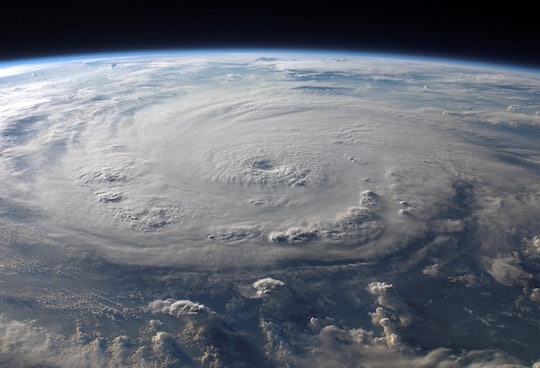 Florida Governor Declares A State Of Emergency For Hurricane Irma

A matter of weeks after Hurricane Harvey hit Texas, the U.S. and its surrounding providences are preparing for impact from yet another dangerous storm. With a trajectory that will take Hurricane Irma through Puerto Rico and the Caribbean this week, many are wondering if Hurricane Irma will hit Florida as well. Although the ultimate path of this Category 5 storm is still unknown, Floridians are bracing for impact.

Experts are speculating that Irma will near the U.S. coastline in south Florida, potentially even making landfall there as early as this weekend. The National Hurricane Center has deemed it a "very dangerous storm" and recently changed its classification to a Category 5. According to The Washington Post, TNOAA Hurricane Hunters registered Irma's wind speeds at a maximum 175 mph on Tuesday morning. These high speeds rank it among the most powerful storms ever to be recorded in Atlantic waters.

As of Tuesday morning, Irma was moving through the Atlantic roughly 270 miles east of the Caribbean islands of Antigua and Barbuda and heading west, according to CNN. The forecast track for this storm changed a bit over this past weekend, shifting to the south and the west. As of the most recent reports, it is expected to hit or impact the U.S. coast early next week.

Meteorologists are still unsure where exactly it will make contact with the coast, but Florida and the rest of then Gulf Coast are considered serious risk areas. According to The New York Times, Florida's Gov. Rick Scott has declared a state of emergency for all of the state’s 67 counties. In a statement Scott said, “Hurricane Irma is a major and life-threatening storm, and Florida must be prepared,” the Times reported.

Other potential candidates for locations of impact along the East Coast include the Carolinas and the Delmarva Peninsula. These areas should be prepared for landfall, but may only receive heavy rainfall, powerful wind, and coastal flooding. The National Weather Service has advised preparation for any possible area of impact. In a statement made on Tuesday morning, the service said:

It is still too early to determine what direct impacts Irma might have on the continental United States. However, everyone in hurricane-prone areas should ensure that they have their hurricane plan in place.

It is important to keep in mind that the projected path of the coming storm will continue to change as it approaches. Staying informed of the most recent reports from the National Weather Service and the National Hurricane Center is the best way to remain up-to-date on the impacted locations.