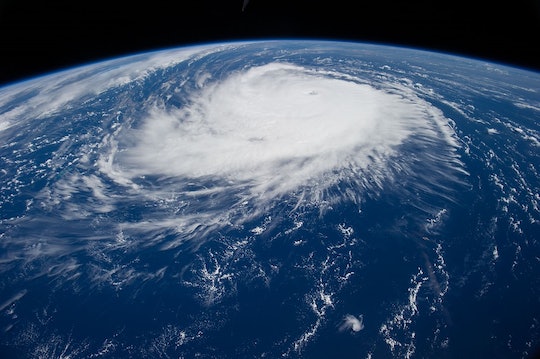 This Is When Forecasters Think Hurricane Maria Could Hit North Carolina

States along the Atlantic may be preparing for yet another hurricane. After making devastating landfall in Puerto Rico, Hurricane Maria may also hit North Carolina's Outer Banks as early as Monday or Tuesday of this week, meteorologists predict as it heads north. And with current projections at hand, this powerful storm may head towards the U.S. East Coast as early as this week, too.

"Hurricane Maria is forecast to track up the southeastern coast of the United States, and winds from the storm are expected to reach North Carolina as early as Monday," The News & Observer reported on Sunday, adding that the storm is not expected to make landfall.

Leading up to Sunday's reports, the National Hurricane Center said in an advisory on Saturday that the United States should now brace for impact from Maria. "It's becoming increasingly likely that some direct impacts will occur along portions of the coast next week," the NHC warned. "Interests in the Bahamas and along the Carolina and Mid-Atlantic coasts should monitor the progress of Maria."

While severe damage to the United States is unlikely, NHC forecasters are calling for "dangerous surf and rip currents" along beaches in the southeastern region in the following days:

Swells from Maria are increasing along the coast of the southeastern United States and are expected to reach the mid-Atlantic coast tonight and on Sunday... These swells will likely cause dangerous surf and rip currents at the beach through much of next week.

Hurricane Maria previously hit the U.S. Commonwealth of Puerto Rico on Wednesday as a Category 4 major hurricane. While there, it killed at least 10 people and left the entire island without power, according to Bloomberg. Officials in Puerto Rico have described the state of the island as "apocalyptic." CNN reported that entire roads were washed away and millions of people were left without communication, power, or water.

Jack Beven, a senior hurricane specialist at the NHC in Miami, said that the storm will probably reach the United States next week. And if Maria does reach the United States, it will not be arriving as a Category 4 as it did in Puerto Rico. As of Sunday, it was located about 530 miles south-southeast of Cape Hatteras, North Carolina. Its top wind speeds were at 110 miles per hour, classifying it as a Category 2 hurricane. Bloomberg reported that it has been steadily dropping in strength since hitting Dominica and Puerto Rico earlier last week.

Because the Outer Banks is a string of barrier islands that spans much of the North Carolina coast — much like the Florida Keys after Irma — residents of the Outer Banks have only one road in and out of their homes and would be in serious trouble if the storm were to hit with force. Thankfully, it looks like strong winds and waves should be the brunt of their experience.

This has been a particularly potent hurricane season for the United States and the surrounding islands. Three Category 4 hurricanes have hit the nation since Hurricane Harvey made landfall in Texas on Aug. 25. Bloomberg reported that collectively they have caused an estimated $170 billion in damages. When the massive damage in the Caribbean is taken into consideration, that number jumps to an astounding $300 billion, according to Bloomberg.

Despite the storm-heavy past month or so, the 2017 hurricane season doesn't officially end until Nov. 30, leaving plenty of time for more storms to come. Phil Klotzbach, lead author of the Colorado State University seasonal hurricane forecast, told Bloomberg that warm ocean temperatures would suggest that we haven't seen the last storm yet.

In a tweet from last week, Klotzbach said that the ocean temperatures "match up well with what is typically observed when the end of the Atlantic hurricane season is active."

Aside from Maria, Hurricane Lee is currently circling the central Atlantic, but the NHC said that it isn't a risk to make landfall. As the East Coast plans for Maria's impact — likely in North Carolina — it can take solace in the fact that it won't be contending with the likes of Irma again so soon.