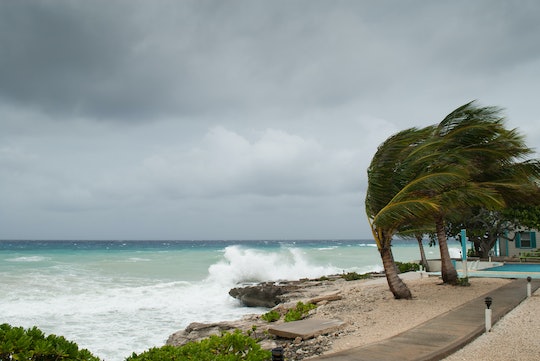 Will Hurricane Maria Hit The United States? Puerto Rico Is Right In Its Path

Hurricanes Harvey and Irma have been such an extreme-weather double whammy that it's hard to believe there could possibly be more to come, but on Sunday night, another storm — Maria — officially gained hurricane status, making it the seventh hurricane of the 2017 season, according to USA Today. Will Hurricane Maria hit the United States? It's likely too early to tell at this point, but the storm does seem posed to pummel the already-hurricane-ravaged Caribbean, in a similar pattern to its predecessor, Irma. And that means that, so far at least, Florida isn't exactly safe, and that it's still entirely possible that the storm could hit the the United States mainland.

That's because, while Maria doesn't yet pose an imminent threat to Florida, forecasters are expecting it to reach the Bahamas by next weekend, which would put it in Florida's vicinity — and, according to USA Today, AccuWeather meteorologist Dave Samuhel has predicted that "a blocking high-pressure system" could push the storm directly in Florida's direction. That's a big deal for sure, and there's no question that experts will be keeping a very close eye on the storm's progression. But for now, it looks like Maria will actually pose a much bigger threat to Puerto Rico and the U.S. Virgin Islands.

According to NBC News, Hurricane Maria is expected to have a "catastrophic" effect on Puerto Rico, an island that was actually spared by Irma, but which is now right in Maria's path. A hurricane watch was issued for Puerto Rico early Monday morning, and it's expected that the storm will be considered a "major hurricane" by the time it approaches. And if it reaches Category 4 status, as projected? It'll be the first time in nearly 90 years that the island will have been hit by a storm that intense.

But perhaps the biggest concern is how well Puerto Rico will actually be able to withstand such a hit. Unlike some of its Caribbean neighbours, Puerto Rico wasn't directly ravaged by earlier storms, but according to USA Today, the island's "fragile electrical grid" meant that the heavy rainfall and wind brought by Irma still caused massive power outages, and left three people dead. And while Puerto Rico Gov. Ricardo Rosselló told reporters Sunday that the island was prepared ahead of Hurricane Maria with about 450 shelters capable of taking in as many as 125,000 people in an emergency, according to ABC News, he also indicated that residents were still feeling the effects of the previous storm. According to NBC News, Rosselló said as many as 46,000 residents were still without electricity, and another 6,000 were still without drinking water.

Hurricane Maria is actually one of three storms currently on watch on the Atlantic Ocean, according to CNN, but it's emerging as the one most likely to cause the most damage to the Caribbean — a region that has already had to endure significant devastation from extreme weather. The storm is expected to pass across the Leeward Islands Monday, and Irma-ravaged islands like the U.S. and British Virgin Islands, St. Maarten and St. Martin, St. Bart's, and Anguilla, are all under a hurricane watch, with the storm expected to arrive in the area by Wednesday night.

According to The Orlando Sentinel, Florida residents can for now at least feel hopeful that the probability of Hurricane Maria hitting the state is still low — though that could change in the coming days as the storm continues to approach the Bahamas. But on Sunday, Florida Sen. Marco Rubio took to Twitter to urge Florida residents to take the opportunity to prepare "just in case" the hurricane does end up heading their way.

After the devastation brought by Hurricane Harvey in Houston in August, it was hard to believe that Hurricane Irma was already bracing to leave its mark on Florida so quickly. Now, the news that Hurricane Maria may be right around the corner feels like yet another major blow, and it's incredibly unsettling to think about what may lie ahead.

While there may not be any way to prevent Hurricane Maria's wrath, it's clear that residents will be trying their best to prepare and brace for the storm's impact, and that the current hurricane relief efforts will continue to be ongoing. But while Puerto Rico might not be as lucky this time around, hopefully, for Florida's sake, this storm will give the state a much-needed miss.