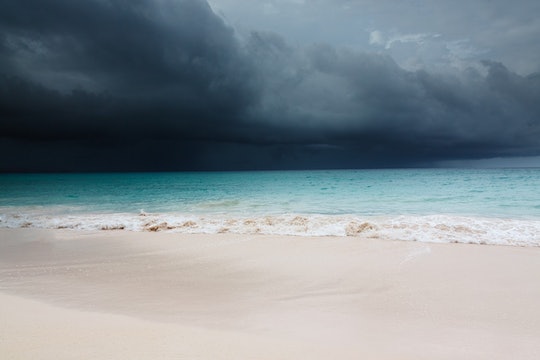 Will Hurricane Nicole Hit The US? Bermuda Is Bracing For The Worst Of The Storm

Hurricane Nicole is headed toward the island of Bermuda, and could prove to be the biggest storm to hit the area in years. Hurricane Nicole gained momentum recently and forecasters were concerned it could reach a Category 4 as it approached the British territory, but it has lost a bit of speed and is expected to pass Bermuda as a Category 3 storm. Will Hurricane Nicole hit the U.S.? It looks like it will track back out to sea and away from the U.S. after passing Bermuda.

Hurricane Nicole is expected to hit Bermuda on Thursday, according to ABC News. And according to the Hurricane Center in Miami, Florida, trackers are expecting the storm to pass just a mile or two east of Bermuda, sparing the island a direct hit, yet still producing potentially catastrophic winds, rains, and storm surge, ABC News reported.

"While hurricanes often affect Bermuda, a hurricane this strong is rare," the National Hurricane Center said, according to ABC News. Bermuda is certainly no stranger to high winds and storms. Just last month, Tropical Storm Karl blew through the island with sustained winds of more than 65 miles per hour, according to The Weather Channel. Karl caused all kinds of flooding across the archipelago, and significant coastal erosion, The Weather Channel said.

But when it comes of major storms the size and scope of Nicole, only three major hurricanes have passed within 65 nautical miles of Hamilton, Bermuda, The Weather Channel reported. The last major hurricane was Gonzalo in 2014, which came closest to Bermuda as a Category 2 hurricane. By contrast, Nicole is expected to pass Bermuda as a Category 3 hurricane, which is defined as having sustained winds of more than 111 miles per hour. Nicole's winds have been clocked at around 125 miles per hour, according to The Weather Channel.

According to NBC News, schools and government offices across Bermuda were closed as residents made preparations to hunker down and ride out the hurricane. "I believe we are generally ready for it," Premier Michael Dunkley said, according to NBC News. "Now we just have to hope and pray for the best." NBC News added that surf started kicking up late Wednesday across Bermuda and even into Puerto Rico.

Americans still reeling from the effects of Hurricane Matthew can breathe a sigh of relief. A tracking map from Weather Underground, and other outlets, like the one above from ABC News, show Hurricane Nicole's trajectory is expected to tack back out into the Atlantic, and away from the coastal U.S., after pummeling Bermuda.