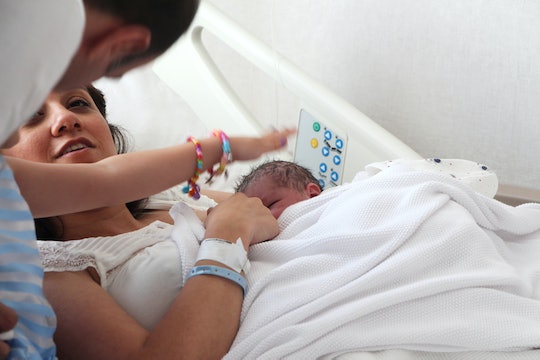 Will I Feel My Milk Come In?

Throughout pregnancy, there are a lot of changes happening to you – from your belly growing to hormones running rampant to your body preparing to breastfeed. When you hit the third trimester, you'll notice more changes in preparation for birth. One of those changes is when your breasts create a substance called colostrum. Occasionally, colostrum will start leaking towards the end of pregnancy, but for most moms, it's after they've given birth. This doesn't, however, mean your breastmilk has come in just yet. Moms often find themselves wondering, "Will I feel my milk come in?" And if so, when?

According to Kids Health, your body produces colostrum a few days after birth as a type of "pre-milk." Its consistency and look varies from white and watery to yellow and thick, and it has a slow flow to help babies learn to latch, suck, breath, and swallow correctly. But colostrum is especially important because, according to Medela, your breastmilk will start to produce after the colostrum stage, which is generally two to five days after birth.

At some point during those two to five days after giving birth, your breasts will start to harden and feel firm. Kids Health noted that this is often a sign of your breast milk coming in and that the colostrum you're producing is changing to milk. Most mothers are able to "feel" their milk come in the sense that their breasts feel full, heavy, and hard.

Once your breast milk comes in, you may start to feel something called a "let-down," which is simply the feeling of milk letting down into your breasts while your baby is nursing. According to Breastmilk Counts, some moms feel this let-down reflex as a tingling, warmth, or even heaviness, while, other moms don't feel it at all. Occasionally, moms also have the let-down reflex when they hear a baby cry, see a picture of their child, or think of their baby or something that causes similar feelings.

All this being said, a mother's milk may even take longer to come in than the standard two to five days, and that's normal as well. According to Kids Health, babies don't need much more than colostrum the first few days, and as long as the doctor can verify your baby is getting enough to eat, it's no cause for concern.

Although there's no definite rhyme or reason for when your milk comes in, most mothers will feel their milk coming in within the first few days of giving birth. When you start to feel engorgement, hardness, or the let-down reflex, it's a sure sign that your breastmilk is coming in, and you're transitioning away from colostrum.