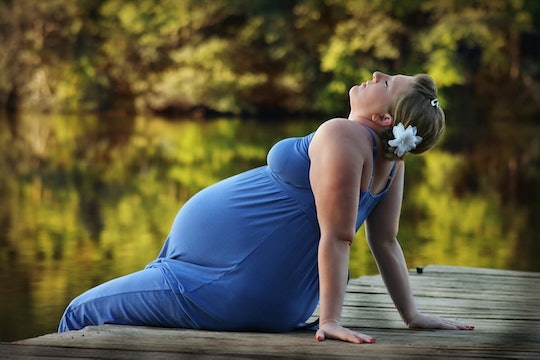 Will I Have An Orgasm During Birth? It's Definitely Possible

There are many things pregnant women ask their doctors, but I bet the one thing you haven't considered asking is, "Will I have an orgasm during birth?" I have only gone through childbirth twice, but I can state with absolute certainty that I did not orgasm while delivering either of my babies. Yet, there are women who claim to have experienced orgasmic sensations during their own childbirths.

And they are happy to share their experieince with others. In an interview with Cosmopolitan, three women described what an orgasmic birth felt like for them. Although one had a spontaneous orgasm, the other two self-stimulated or were sexually stimulated by their partner. Two of the women who were interviewed had one orgasm each, while the third claimed to have experienced four orgasms throughout labor and delivery. All three women delivered their babies at home.

I know what you are thinking: There is no way this is true. But, according to Live Science, studies suggest that orgasmic births, also known as ecstatic births, are not only true, but scientifically possible. A study conducted by French psychologist Thierry Postel, contacted 956 French midwives and asked them to complete an online questionnaire about orgasmic birth. 109 of the midwives, who together had assisted in around 206,000 births, submitted complete responses. The midwives reported 668 cases in which they were told by the mothers that they'd felt orgasmic sensations during childbirth.

Because the same anatomy is being stimulated during childbirth as during intercourse, it does seem possible that both can create a similar outcome. "It's stimulation of the birth canal, stimulation of the cervix, the vagina and the clitoris and uterine contractions," Barry Komisaruk, a professor of psychology at Rutgers University in New Jersey who studies orgasm, told Live Science. Komisaruk has also found that sexual stimulation and orgasm reduce sensitivity to pain. If pain is reduced and pleasure is increased, why couldn't an orgasmic birth be possible?

Debra Pascali-Bonaro, a Lamaze childbirth educator, made a documentary called Orgasmic Birth: The Best-Kept Secret where she films seven women experiencing what she describes as "joyous, sensuous and revolutionary" childbirth.

In an interview with ABC News, Pascali-Bonaro described the benefits of an orgasmic birth and explained how the U.S. needs to be more accepting of methods that aid in child birth. "If we look at most other countries in the world, women have a lot of options. They're allowed to be upright, they can move in labor. They can use warm water. They can use balls. There's so much that they can do that makes the experience easier," she said. "In the U.S. today, you walk in a typical hospital, you're put in bed on your back. That in itself makes labor longer and harder and more painful."

Pascali-Bonaro also told ABC News that, although it is possible, the goal is not necessarily to have an actual orgasm during childbirth. She wants to women to know that they can journey through labor and birth in many different ways and there are many options available to make it a positive and pleasurable experience.