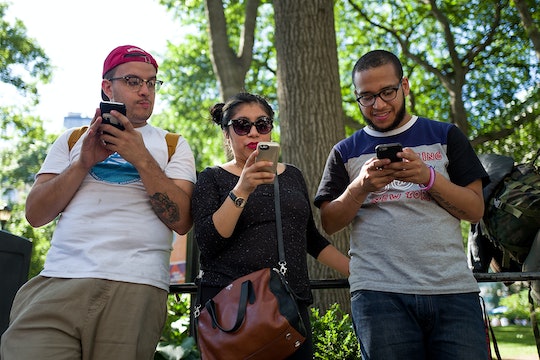 Will I Lose Friends If I Don't Play Pokémon Go? Probably

I am afraid. Since Pokémon Go launched this week, all anyone wants to do is walk around and try to capture fictional creatures in the park. But I can't tell a Rattata from an Oddish, and yes, I had to look those names up. "They are fake! I am real!" I say, as my friends stare at their screens. "Shut up," they reply. "There's a Charmander around here somewhere, and I will store it in my Poké ball!" So will I lose my friends if I don't play Pokémon Go? Probably, yes.

For those who have, say, been trapped in a cave for the last few days, or recently returned from a mission in outer space, Pokémon Go is a new mobile game from Nintendo that takes those adorable cartoon creatures fans liked to catch and train so much in the '90s, and puts them into the real world (kind of). Using your phone's GPS and camera, the game makes different Pokémon appear around you depending on where you are, and you have to catch them all. Then, you can make them fight against each other, like some sort of starter dogfighting ring. (What kind of message is this game sending?)

For a large segment of the population, the game taps into childhood nostalgia, but I'm still waiting for an augmented reality where I get to hang out with the characters from Ella Enchanted. And so I fear that soon, my friends and I will have nothing to talk about. Relationships that survived the transition from childhood to the real world will wither in the face of my indifference to a certain spot in the neighborhood being a "gym," whatever that means. Maybe a friend can deal with me yelling at her in a taxi that one time when I was really stressed out, but can she come to terms with me not being appropriately excited for her ascendence to Level 6?

I seem to see the future before me, like Scrooge with the Ghost of Christmas Yet To Come. My friends frolic in the park, their faces in their phones but their spirits united. I watch them out my window, pretending I am cooler than they are. I turn away, struck by the terrible realization that now, Pokémon players are the cool ones, and I am the equivalent of an old typewriter, gathering dust. While I'm crying, my friends get robbed by people using the game to lure targets to remote locations. No one is happy. Pokémon Go has ruined the world.

Or maybe everyone will get tired of it in a couple of weeks. That seems likely too.