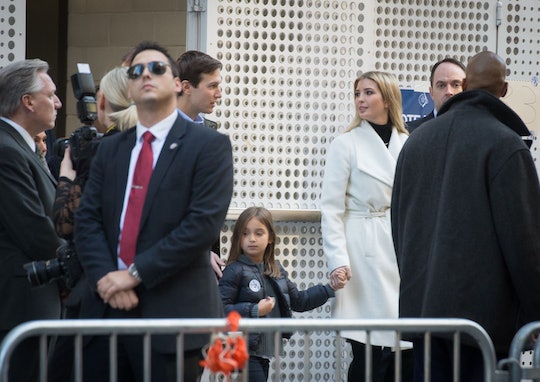 With Donald Trump beginning his stay at the White House in just nine short days, the logistics behind his family's role in his staff are interesting. Yesterday, Trump announced his plans to name Ivanka Trump's husband, Jared Kushner, as one of his senior advisers, but Ivanka has not yet been named to a position. Nonetheless, as Ivanka will be living with her kids in the capital city, questions over whether Ivanka will send her kids to private school in D.C., or if she'll choose instead to follow her father's creed of being "of the people," and go the public school route (as well as how much detail the public should be privy to) are still up in the air.

The answer to all that, like so many things about the incoming Trump presidency, is tricky. While Trump's own wife and son, Melania and Barron, have already revealed that they will not be joining Trump in the White House residences, Ivanka has taken full advantage of her father's move, and already bought a house in D.C.

While only one of her children is old enough to be in school all day, it remains to be seen whether or not she will send 5-year-old Arabella Rose Kushner to a private school in Washington, or go another direction.

As those in the know might tell you, there are, of course, some things to take into consideration. Ivanka and husband Jared are Orthodox Jews, and there are several options in Washington D.C. that would give their kids the faith-based sort of education they're (possibly) looking for.

However while it seems Ivanka is ready to take on some new responsibilities to advocate for kids and mothers in D.C. (as she detailed in a Facebook post this week — more on that in a moment), those curious about her family's new life there should be careful and ask themselves, though it may be tempting to do otherwise: Is it anyone's business where Ivanka sends her kids?

Ivanka's dedication to her kids has always been apparent, as is her dedication to equal rights for women and fair parental leave policies for new mothers. And it's no secret that Ivanka is gearing up to make her mark in D.C., posting the following message to her Facebook page Wednesday afternoon:

My husband, Jared, and I will be moving with our family to Washington, D.C., where Jared will serve as Senior Advisor to the President. I plan to take time to settle our three young children into their new home and schools.

... I'm grateful for the overwhelming amount of outreach I've received from people all across America who have shared their stories and offered to extend their ideas and expertise in the areas I am deeply passionate about, including the education and empowerment of women and girls; leveling the playing field for female entrepreneurs and job creators and unleashing the potential of women in the workplace. I am eager to hear more from them as I determine the most impactful and appropriate ways for me to serve our country.

But despite all this — Ivanka's plans to remain a public figure in the capital — prying into her kids' lives still feels inappropriate. Before she was the daughter of our future president, Ivanka was a celebrity, so it's likely she understands the public curiosity. However, now that her father is even more in the spotlight than before, so is Ivanka, and unfortunately, so are her kids — and in order to shield and protect them from a nosy public, it makes sense that she wouldn't go into detail about their plans, a decision we should all respect.

As past presidents have shown us, children growing up in or around the White House is a stressful situation for everyone involved. And even if you despise Trump and his politics on a molecular level, you can't take that out on the youngest members of the family. They deserve privacy, and as normal as an upbringing as possible, no matter what their mother and father end up doing for the White House itself. If and when Ivanka decides to discuss her children's education is her choice and no one else's.

Whether or not you agree with Ivanka's politics, or those of her father, it's still important to remember that, before anything else, she is, like so many out there, a caring, dedicated mother — and whatever she does in that respect is really none of our business.