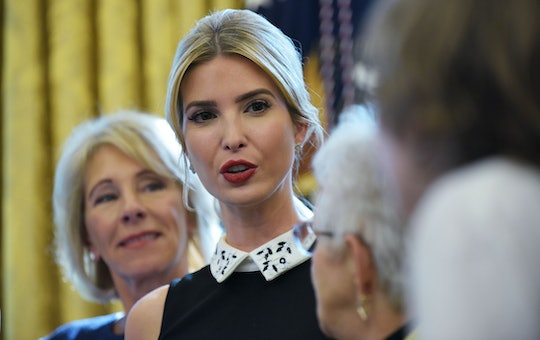 Get Ready, Because Ivanka Trump *Might* Run For President, According To Her Mother

Listen, at this point in history, it's safe to assume that just about anything is possible. The United States has a former reality television star as a president, nuclear war seems like an actual possibility, and you can basically get anything delivered to you in two days. So, it really shouldn't come as a surprise that the question of whether Ivanka Trump will run for president is an actual, serious question people are pondering right now. Because according to her mother's new book, it isn't all that far-fetched of an idea.

Ivanka's mother, and President Donald Trump's first wife, Ivana Trump, revealed in her new book that she wouldn't be surprised if her daughter decided to go further with her career in politics. The book, Raising Trump, won't be released until Oct. 10, but some people have gotten their hands on advanced copies. As Newsweek reported, Ivanka's mother "speculated that the first daughter could run for office in future."

In discussing her daughter's political future, Trump was optimistic. "First Lady? Holds no appeal for me personally," she wrote, according to Newsweek, , continuing, "First Mother? That could work."

And she might not be wrong, considering that Ivanka established herself as a somewhat-progressive Republican female voice back at the 2016 Republican National Convention. At the time, her speech proved to be eloquent, well thought out, and impassioned. Truly, Americans were impressed, and it has even been mused that Ivanka is the strongest voice of reason whispering in her father's ear, although that's a little harder to prove.

Although what can be known for sure, is that, according to Ivanka's mother, a run for president could be her daughter's next big career move. "Maybe in fifteen years, she could run for president?" she wrote in her book, as the Associated Press reported, seeming to confirm many Americans' assumptions.

Currently, Ivanka is an unpaid advisor to the president, although she has attended many events and meetings that are certainly much more high-security than many children of presidents past have attended. So really, it wouldn't be too shocking to see her continue her political career after her father leaves the White House, although at what capacity is still yet to be determined.

Yes, a female president would certainly be a great step forward for women's rights, but many have noted that Trump's oldest daughter isn't actually a great feminist herself. In fact, it's been noted that Ivanka has brushed off the numerous allegations of sexual assault against her father, and hasn't actually done much of anything for women since joining her father's team.

And the internet also doesn't appear to be a fan of this prospect:

As for Ivanka herself, she hasn't spoken much about the topic of a possible future run for president, although what she has said seems to confirm her mother's notions. In an interview with Cosmopolitan in 2016, she was asked about a future in politics and gave a fairly vague answer:

I do not think so, but I have learned in life to never say never! It is too limiting!

So, while it can't really be completely assumed that Trump's daughter will continue in her father's footsteps of venturing into politics, it remains that it is a possibility. And however you feel about the first daughter personally, there's no arguing that a president's child following their parent's lead isn't exactly anything new, although that may or may not be a good thing.

Nevertheless, until Ivanka either makes a decision on the matter, nothing can be known for sure. And if her mother's speculation does become a reality one day, the nation can't say it wasn't prepared.