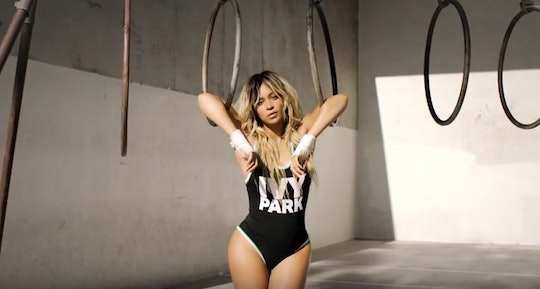 Will Ivy Park Have A Summer Line? Pics Are Already Out

As if we needed another reason to adore Beyoncé, Queen Bey recently admitted that, despite her insanely glam fashionista wardrobe, she mostly just lives in workout clothes like the rest of the world. But unlike the rest of the world, when she felt like she couldn't really find the perfect brand of fitness apparel to suit her needs, she opted to just create her own. Beyoncé has collaborated with Topshop's Sir Philip Green to design a new stand-alone activewear label called Ivy Park, and understandably, everyone will want to get their hands on it when it launches April 14. The timing means it'll be perfect for Spring, but will Ivy Park have a Summer line too? Yes — sort of. Technically Beyoncé's inaugural Ivy Park collection is Spring/Summer '16, according to the Daily Mail, so it'll cover both fashion seasons in one.

What can fans expect from Ivy Park? According to Pop Sugar, Ivy Park will consist of "modern, performance wear," that can work as both exercise apparel and general athleisure-style clothes. In a press release for the line, Beyoncé explained that she hoped to "push the boundaries of athletic wear," and to "support and inspire women who understand that beauty is more than your physical appearance."

Still not quite sure what that means? This killer promo video will explain everything you need to know.

Well, almost everything at least. One thing the video doesn't mention is how you can actually get your hands on Ivy Park clothing, and what the collection will consist of. Topshop will carry the Ivy Park line (which is kind of a given), and it'll be available both online and in-store. According to the Topshop USA website, the sportswear-meets-casual wear brand is designed to "[empower] women through sport — no matter what your sporting ability or body shape," (yas!), and will include "leggings in three rises, crop tops, drop arm tees, sweatshirts and technical jackets."

Ivy Park will be available to purchase other places, too — Nordstrom, Net-a-Porter, Zalora to name a few, according to Pop Sugar.

But, from the sounds of it, Ivy Park goes beyond just being another clothing line. Beyoncé named the collection after her own experience growing up running with her dad in a park in Houston, and how that came to represent learning to push her own physical boundaries and becoming mentally strong. That literal park eventually became "a state of mind" that represents overcoming difficult things, and was also the inspiration behind what Beyoncé wanted to achieve when designing her new line. Pretty cool.

Like pretty much anything Beyoncé-related, it's safe to say that Ivy Park is going to be insanely successful, so if you're hoping to get your hands on Ivy Park apparel, you'll probably want to act fast. But whether you use it to push yourself to new heights in the gym, or just to look cute during a Netflix binge, it sounds like Ivy Park has got your athletic wear needs totally covered.