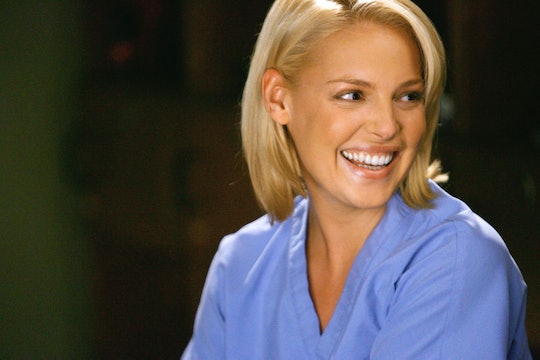 Izzie Is Returning To 'Grey's Anatomy' — Sort Of

With the 300th episode of Grey's Anatomy almost here, it's impossible not to reflect back to the very beginning. The start the show was all about Meredith Grey and her fellow surgical interns: Cristina, Alex, George, and Izzie. Now, only two of the core five remain on the show, but for the 300th episode many fans are hoping for a reunion. So will Izzie return for Grey's Anatomy's 300th episode?

In the preview for the milestone event, two patients arrive at the hospital and they look remarkably like George and Cristina. But where was Izzie's doppelgänger, you may ask? Well, never fear Grey's fans. Entertainment Weekly has confirmed that there will be an Izzie lookalike in the episode as well. There will be a roller coaster accident that brings a number of patients rushing into the hospital. Amongst them are the three lookalikes.

Thus the core five, or M.A.G.I.C. as they're sometimes called, will kind of be reunited once more — sort of. Because of how much these three patients look like Meredith and Alex's old friends, it'll become even more important to them to save the patients' lives. "Cristina, George, and Izzie, we're thinking about a lot during this episode because our three guest actors on the show actually really look like them and remind the rest of the doctors of those characters," Sarah Drew, who plays April, told EW. "That causes the original group to really remember those people well and want to fight for these ones to live."

Izzie's quasi return to the show is something fans have been waiting a long time for. Ever since Izzie, played by Katherine Heigel, left the show during Season 6, she's been scarcely mentioned. Most believe this is due to Heigel's contentious exit from the show and her reported fall out with show creator Shonda Rhimes. Nevertheless, fans are happy that Izzie will be part of this momentous occasion, at least in spirt. However, many still would've preferred if the actual characters had come back themselves. Well, except for George, who was unfortunately killed off. (RIP George.)

Besides the doppelgängers, executive producer Krista Vernoff has promised that the show will look back on its history throughout the episode and will even include some Easter eggs for longtime fans of the show to find. "I tried to honor the beloved characters who have come and gone during the 14 seasons of our show," she told EW. "I might not have hit all of them, but I paid some small tribute to most."

Vernoff also mentioned that viewers may want to "keep your tissues handy," so prepare yourselves to be taken on an emotional trip down memory lane. Some characters the show will most likely may tribute to, in some way, are Addison, Mark, Lexie, Callie, and, of course, Derek. How exactly this will all play out remains to be seen, but just from the trailer alone it's clear this episode will hit fans right in the feels.

The episode is titled with the popular final song from Hamilton, "Who Lives, Who Dies, Who Tells Your Story," and was directed by Debbie Allen, who guest stars and also executive produces the show. This episode was clearly a family affair through its creation and both the cast and crew have said that they can't wait to share it with the fans. This is an episode you definitely won't want to miss!