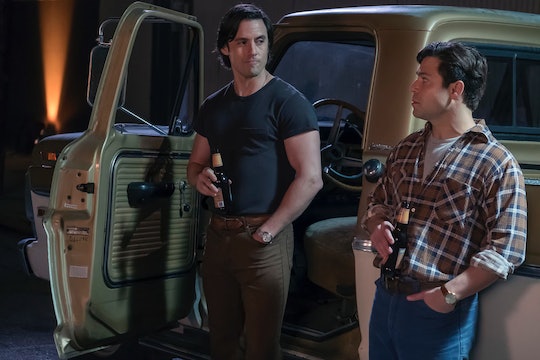 Jack May Be Sticking Around 'This Is Us' For A Bit

It pretty much goes without saying at this point that This Is Us knows how to deliver a powerful episode. And while some may have expected more answers to come from the Season 1 finale, it did give us hope about one concern: the part Jack will continue to play in the upcoming seasons. Since the series has been picked up for not one, but two more seasons, some viewers are desperate to know one thing: will Jack be in This Is Us Season 2? And from the way things ended during Tuesday night's finale, I'd say his continued existence is pretty much secured... for now at least.

During a recent interview with Variety, series creator Dan Fogelman confirmed that Jack's death reveal is still "a ways off," so that right there serves as proof that Jack will be just as prominent in Season 2 as he's been in Season 1. But even if we kept Fogelman's assurance out of the equation, it's clear there's still so much more of Jack's story to tell before he ultimately meets his maker. And I'm not just talking about flashbacks to his early years with Rebecca (though finding out how the two of them met was pretty much amazing). I'm also referring to his future with Rebecca and how their marriage plays out moving forward.

At the end of the hour, Jack and Rebecca's marriage was a very shaky ground. In fact, after their fight from the night before, Rebecca thought it would be best for Jack to move out (at least for the time being) and stay with Miguel for a while. They still have so much love for one another, but they are also going through some very serious struggles that need to be sorted out. Jack feels resentful. Rebecca feels like she's practically a ghost with no life. Each of them has sacrificed so much for their family and now they're unsure how to fix things — or wondering if they even can.

I, of course, will continue to have the utmost faith in them because they are the true definition of relationship goals. But I can't deny that they have a long road of recovery ahead of them. I'm also not sure why Kate blames herself for Jack's death since drunk driving may not play a role in his demise after all. (Even then, it wouldn't have been her fault, but as a young teen, I could at least connect the dots to her train of thought.) But now, I have no idea how this will play out. And while that may seem frustrating at first, let's remember that the more confused we are, the more time Jack will most likely stick around.

So by all means, writers — keep me in the dark as much as possible. Because a season without Jack Pearson is a season I don't want any part of.