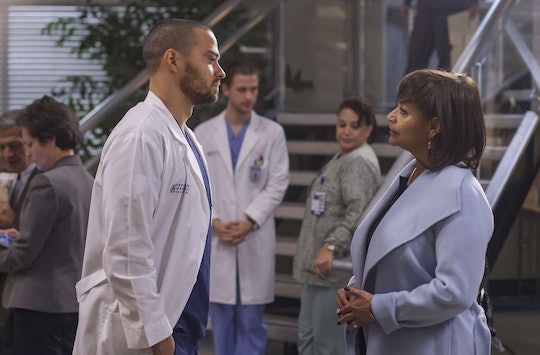 Will Jackson Sue April On 'Grey's Anatomy'? Katherine Avery Is Shaking Things Up

This season of Grey's Anatomy has not been good to the Japril ship. From their divorce, to the unexpected baby that has pulled them even further apart, it seems these two really are never ever getting back together, especially now that Jackson might sue April on Grey's Anatomy. To add more fuel to the fire, Jackson's mom, Katherine Avery, just joined the fray and although at first it seemed like she might actually be there to help, it turns out she had more devious plans in play.

When Katherine first arrives at the hospital, Jackson gives his mother explicit directions not to say anything to April about the divorce or the baby. Of course, being Katherine Avery, she takes Jackson's words with a grain of salt and finds April sitting down after finishing a surgery.

April had planned on avoiding Katherine all day by being in the OR but when Katherine is overly kind to April, April decides to trust her and opens up to Katherine about the pregnancy. She tells Katherine about how she's had no morning sickness, that she's 13 weeks pregnant, and that she discovered she was pregnant the same day she and Jackson signed the divorce papers.

Overall, it seemed like a really good conversation and it even motivated April to ask Jackson if he wanted to get together and talk. Jackson is, of course, happily surprised and even more surprised to know that his mother had anything to do with April's change in attitude towards him.

Never afraid to admit when he's wrong, Jackson thanks his mother for her help and tells her that she was right. To which Katherine says, "Duh," (or something like that) and explains that she got enough information from April for them to sue her for fraud.

Truthfully, I'm not the best with legal jargon, but I know what fraud is and it looks like April could get into a lot of trouble if the Avery duo decides to follow through with the lawsuit. Although I don't fully understand how April not telling Jackson she was pregnant before they signed the divorce papers is fraud, my guess is it has something to do with the fact that custody probably should've been discussed in the divorce proceedings. And, if it's custody that Katherine's after, April better get herself a really good lawyer. Maybe we'll finally get a Grey's Anatomy-Scandal crossover and Olivia will "fix" this. OK, one can dream.