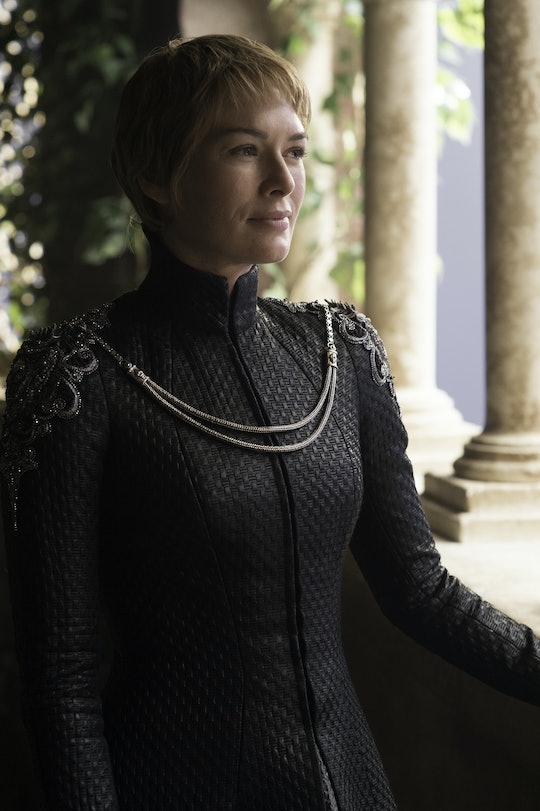 Will Jaime Kill Cersei On 'Game Of Thrones'? There's Still Another Prophecy To Play Out

In the Season 6 finale of Game of Thrones Sunday night, there was no shortage of casualties. Among them was Tommen, Cersei's last living child, who killed himself because of her actions in blowing up the sept, fulfilling the prophecy that Cersei would see all of her children die. But there's another part of that prophecy from fortune teller Maggy the Frog, about being killed by her own brother. So, will Jaime kill Cersei on Game of Thrones? In the show, we saw Maggy the Frog way back in Season 5, Episode 1, when we saw a young Cersei visit the fortune telling hermit who lived in a hobbit-looking hut on Lannister property. The fortune teller allowed Cersei three questions about her future, which all revolved around the power she was going to acquire. Classic Cersei, right?

But there are three parts to Maggy's prophecy for Cersei. The first is that she would marry the king, which she did, and have three children that weren't his — which she did. Another part was that she would become queen until a younger, more beautiful queen comes and takes everything from her. Ahem, Dany is finally on her way to Westeros. And the final part of the prophecy is that for her eventual death, Cersei would die by the hands of her "Valonqar", which is the High Valyrian word for "little brother". Now, this could mean any little brother in Westeros, given that there are tons of people who would pay good money to see Cersei dead and gone, but for the sake of there only being two seasons left of Game of Thrones, let's keep this theory close to home for her.

Will Jaime kill Cersei and be the one to fulfill the prophecy that we have yet to see come true for the new queen and sole rule of the Seven Kingdoms? To have Tyrion kill her would be predictable, and maybe not even all that satisfying. Obviously his full-time allegiance is with Daenerys now as the Hand of the Queen, but he had plenty of chances to poison Cersei or otherwise kill her.

Now that Tommen is dead, having killed himself because of Cersei, leaving her at fault in a way, Jaime has lost another child, and in the final King's Landing scenes in the Season 6 finale, you can see the disappointment on his face as he watches Cersei take the throne. Even Cersei seems to look as if she's satisfied, but realizes the great cost it was to get her here. Still, she sits, holds Jaime's stare, and doesn't blink a single eye. And the way Jaime looks at her, it's almost as if he's seeing the Mad King again, who he'd once been Kingsguard to and had to kill because of his insanity.

Remember that? When, before the events of Game of Thrones, Jaime got the nickname of Kingslayer because he had, in fact, slay the former king of Westeros? The Mad King was also known to, in the later days of his life, shout, "Burn them all!" in reference to killing everyone. And what did Cersei just do with that wildfire in the sept? She didn't burn everyone in the Seven Kingdoms, or even King's Landing, but every single person in the sept was burned alive in there.

Cersei and Jaime are twins, born before Tyrion and the eldest of the Lannister siblings, but Cersei is still minutes older than Jaime, making both Jaime and Tyrion her little brothers, or both of them "Valonqars". So will Jaime kill Cersei in the end? He probably won't want to, and will do everything to bring some sense and compassion to her first, but there is no end game for Cersei that doesn't result in someone killing her. It would be poetic to have it be the last person who truly cared for her, who was also her lover and little brother.