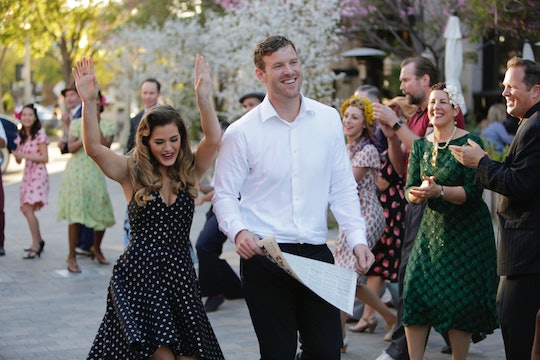 Will James Taylor Be The Next 'Bachelor'? He May Bring A New Attitude To The Show

As this season of The Bachelorette winds down (yes, there are eight dudes left, but in Bachelor franchise time, that's nothing), plenty of people are already speculating who the next Bachelor will be. We don't have a clear idea of who might win this season, although Jordan and Luke have been some very strong frontrunners in recent weeks. It is very clear at this point, though, that one of these Bachelorette contestants is not like the others. As the non-ripped, sensitive singer-songwriter of the group, will James Taylor be the next Bachelor?

He could not have separated himself from the pack more this week, for better or worse, as the one guy who sort of stuck out in the group JoJo has left. He isn't particularly athletic or competitive, and he's really feeling the pressure of not presenting as the same "type" as the other guys in the group. James has opened up about his insecurities to JoJo before on the show, revealing that he was a somewhat awkward, gawky kid who used to get made fun of for his appearance a lot. He's obviously grown into himself, and as part of his crooning, guitar-playing, tender Southern gentleman package, his look totally works for him!

But he is not the most conventionally hunky guy on the show, and that seems to be exposing his insecurities more and more as time goes on. As a defining characteristic, James' insecurity could go one of two ways in deciding his fate as the next Bachelor. It could be his "vulnerable, humanizing" character flaw, similar to Ben's belief that he was fundamentally unloveable, which endears him to the fanbase and leads Bachelor Nation to cheer him on. Or, it could serve to turn the fanbase off, and prove that he's ultimately just too sensitive and unconfident in himself to pull of being The Bachelor.

As last season taught us, anything can happen when it comes to picking the next star of the show, and it all depends on how fans respond to James in the final weeks. The Bachelorette star from Ben's season was supposedly going to be Caila — a perfectly sweet, lovely (and bonus: racially diverse) choice — until Fantasy Suite week. Fans turned on her in the final weeks of the show and ultimately found her a little boring. At the last minute, producers switched it up and JoJo, who everyone thought was poised to "win" Ben, was announced as the star of The Bachelorette. So don't count James out just yet — but his fate will depend on how he fares in the next few weeks.