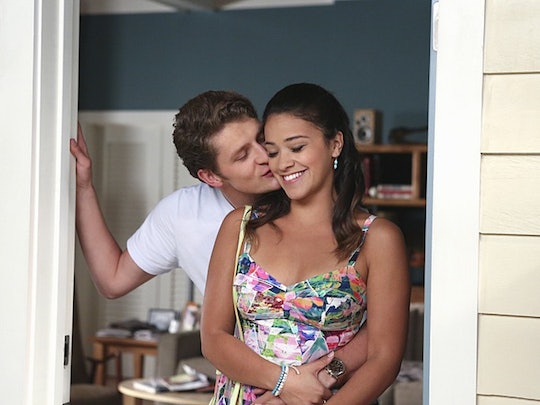 Will Jane & Michael Get Married On 'Jane the Virgin'? They've Been Through A Lot

Although Jane the Virgin has devoted a lot of time to its love triangle, with two very different men vying for the heart of our Jane, it seems all the romantic mishaps have finally settled down — for now at least. "Chapter Thirty-Six" of the show featured Jane and Michael getting engaged on Jane the Virgin, for the second time. Michael has been pining for Jane ever since she broke up with him to give it a go with her baby's father, Rafael. However, things can change in an instant on a show as fast-moving and plot-heavy as Jane the Virgin, so it begs the question: will Jane and Michael actually get married?

Even before the second season began, there was confirmation from showrunner Jennie Snyder Urman that Jane would indeed be walking down the aisle by the end of the year. Family is incredibly important to Jane — which the show has demonstrated time and time again in those tear-jerking Villanueva family scenes — and she's also the kind of girl who likes to make plans and stick to them. Jane's original intention was to graduate from school, get her career settled, then get married and have a baby, but life threw her more than her share of curveballs, so Jane has had to do a lot of readjusting.

Even though their relationship crumbled pretty spectacularly the first time, Jane and Michael have done some serious growing up during their time apart. Michael has worked hard to make Jane feel safe, doing whatever he can to handle his anger issues and to navigate his dangerous job. Jane has struggled with not losing her personal identity within her new motherhood, taking steps to follow her dreams while caring for her son. It seems almost like a sure thing for Jane and Michael to get married, but you can never count on that with Jane the Virgin's penchant for the twistiest of twists.

In an interview with TV Guide, Urman shared some of the qualities that Jane's husband-to-be will have to possess, and said, "For Jane, it's got to be the feeling that she and this person will be their best selves together, that she feels supported in both her personal and professional life, that she feels they have good communication and can continue to work on that. [They need to be] smart, funny, loves her son — biggest of all. All of those things have to click into place."

I don't know about you, but it sounds to me like Michael checks a lot of those boxes.