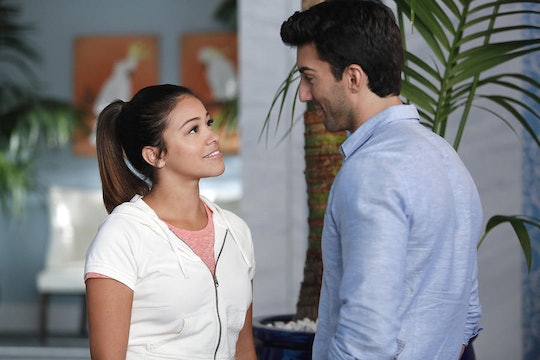 The love of Jane's life, Michael Cordero Jr., died in the latest episode of Jane the Virgin and Team Rafael is already set to pounce. So will Jane and Rafael get together after Michel's death on Jane the Virgin? Now that her husband is gone, it does open the door for Mateo's parents to reunite. But that doesn't necessarily mean they will or even should for that matter.

As the latest episode indicated, the show will jump three years into the future and showrunner Jennie Snyder Urman confirmed to Deadline that Rafael will spend some of those three years in jail. Therefore it seems unlikely that Jane and Rafael would've gotten together during this three-year gap and hopefully they won't after the time jump. The fact is that Jane chose Michael over Rafael and even though Michael is no longer in the picture, that doesn't mean she should just default back to Rafael.

For one thing, Rafael deserves better than being Jane's second choice and they're in a good place right now as co-parents and friends. If they try to date again, it could get messy and while I love drama, I don't want to see either Jane or Rafael get hurt... again. The two of them didn't work out before for a reason and while yes they've both changed since then, they haven't changed so much that their relationship would suddenly just work.

Moreover, it's obvious that the Jane the Virgin writers love their twists and having Jane get back together with Rafael just seems too easy and not their style at all. It's much more likely that Jane will get a new love interest (or see the return of her old flame, Sam), and Rafael will end up someone else.

Personally, I'm rooting for Petra and Rafael to make it work. Petra and Rafael have an understanding that I don't think Jane and Rafael ever had. They know each other probably better than any one else. They're both willing to bend/break the law to get what they want, they both love the Marbella, and prior to the time jump, they were starting to get along again. Honestly, it felt like the show was setting up for Petra and Rafael to rekindle their romance and I wouldn't even be surprised if they're the ones getting married.

The truth is, while Jane and Rafael definitely made a very cute kid, their romantic relationship is over and it should remain that way. Hopefully the writers agree.