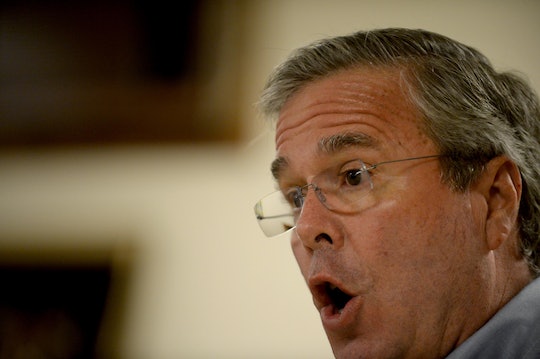 Will Jeb Bush Appear On 'SNL'? Maybe, But Not Because Of Equal Time

Now that Hillary has appeared on Saturday Night Live, and Donald Trump is hosting Nov. 7, we have to ask: Will Jeb Bush appear on SNL? While it seems like it would only be fair to have the candidate on, that’s not necessarily the case, at least according to the government’s equal time rule. And it begs to be said: Humor is not Jeb Bush’s strong suit. You can see that he wants it to be, but Jeb is sort of like your best friend’s dad. He means well and is more than happy to drive you guys to the school dance, but he will make embarrassing and corny jokes the entire way, and then he will make everybody feel awkward about it. Remember when Bush slow jammed the news with Jimmy Fallon after announcing his candidacy and looked really uncomfortable the whole time? Remember when Jeb called Supergirl “kind of hot” at a campaign event? Yeah. It’s like that.

There are rumors that SNL creator and producer Lorne Michaels will have to let Rubio and Bush host SNL in order to give the candidates equal network air time (and we would pay for Bernie Sanders to host the show with another Larry David SNL cameo playing the Bern). The equal time rule is an FCC regulation that candidates must be given a fair amount of time on your television screen. But it’s complicated, and often super misunderstood. First of all, campaigns have to ask for equal time. Variety reported that when Hillary made her cameo, the FCC clocked the sketch at just over three minutes and sent a memo that if any campaigns asked for equal time, they had to give them those three minutes, too. But no campaign did. So NBC doesn’t have to let any other candidate host SNL if they don’t want to. If they ask, then it’s an entirely different matter.

That said, Michaels could choose to invite Bush and anyone else for that matter. The question is whether he thinks Bush would be entertaining enough to hold the audience. Based on his previous performances, the consensus on Twitter seems to be: please, Lorne, don’t do it.

Some pols are natural performers. Obviously Trump fits that bill. Hillary didn’t do so bad herself. But you can almost already hear the crickets if Jeb Bush were to take the stage. SNL is often awkward on its own. That’s the nature of sketch comedy. Sometimes it’s a hit and sometimes it’s a big miss. If you add someone people already think is funny, interesting, or in the case of politicians like Obama or Hillary Clinton, can adapt and actually kind of be amusing, it works. But you add Jeb to the mix, it may well go wrong. Very, very wrong.

That sentiment has echoed across Twitter in recent days:

While Trump’s hosting appearance is probably going to be a little rough, having Jeb Bush host would just be bad news for his campaign. He’s already having trouble trying to look accessible to voters. Fair time or not, the last thing anyone needs to see is him try to improv with SNL talent. For his sake (and ours, really), fingers crossed his advisors know better than to fight for equal time.